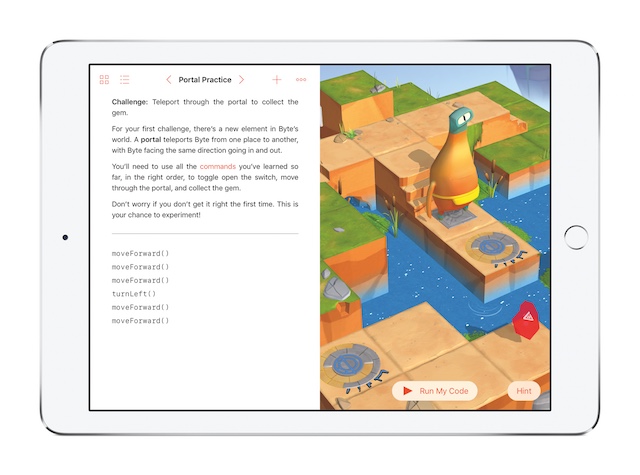 Apple has introduced an all new Swift Playgrounds app for iPad at WWDC 2016 today, that promises to make learning to code fun and easy for anyone. The innovative app brings coding to life with an interactive interface that encourages students and beginners to explore working with Swift, the easy-to-learn programming language from Apple used by professional developers.

“I wish Swift Playgrounds was around when I was first learning to code,” said Craig Federighi, Apple’s senior vice president of Software Engineering. “Swift Playgrounds is the only app of its kind that is both easy enough for students and beginners, yet powerful enough to write real code. It’s an innovative way to bring real coding concepts to life and empower the next generation with the skills they need to express their creativity.”

Swift Playgrounds includes Apple-developed programming lessons where students write code to guide onscreen characters through an immersive graphical world, solving puzzles and mastering challenges as they learn core coding concepts. “The new Swift Playgrounds app from Apple is one of the most powerful, yet approachable, educational coding apps we’ve ever seen, and we can’t wait to incorporate it into our upcoming camp curriculum,” said Jean MacDonald, founder of App Camp for Girls.

A preview release of Swift Playgrounds is available today to Apple Developer Program members as part of the iOS 10 developer preview and will be available with the iOS 10 public beta in July.