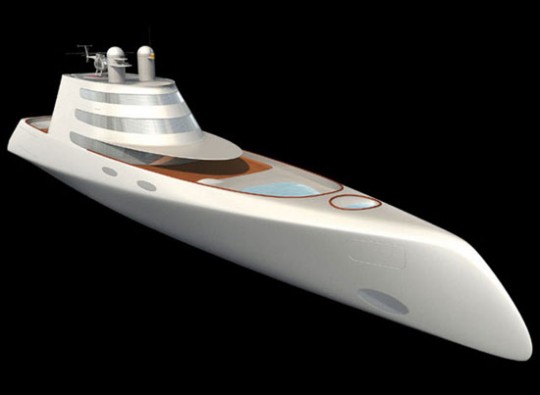 Earlier today we heard about how French designer Philippe Starck mentioned on French radio he was working with Apple and that a ‘revolutionary’ product was set to be released in eight months. Well, AllThingsD got a statement from Apple and they have poured cold water on the story:

Reached for comment, an Apple spokeswoman said the company is not working on a new product with Starck.

AllThingsD notes the ‘revolutionary’ product Starck is referring to could be the custom yacht Steve Jobs had been building prior to his death. Steve Jobs and his family used to rent a boat for their vacations prior to his liver transplant. It was on these trips Jobs hated the design of the boats they rented, so he decided to design his own luxury yacht.

Walter Isaacson’s biography reveals the details Steve had in mind for the design of his custom yacht. He almost cancelled the project when he got sick in 2009, but kept on going:

As expected, the planned yacht was sleek and minimalist. The teak decks were perfectly flat and unblemished by any accoutrements.  As at an Apple Store, the cabin windows were large panes, almost floor to ceiling, and the main living area was designed to have walls of glass that were forty feet long and ten feet high.  He had gotten the chief engineer of the Apple Stores to design a special glass that was able to provide structural support.

By then the boat was under construction by the Dutch custom yacht builders Feadship, but Jobs was still fiddling with the design.  “I know that it’s possible I will die and leave Laurene with a half-built boat,” he said.  “But I have to keep going on it. If I don’t, it’s an admission that I’m about to die.”

Philippe Starck has worked directly with Feadship, for example on the interior design of yachts.

If this yacht story isn’t good enough for you, iDownloadBlog has heard whispers Philippe Starck is actually working on the design of a new Apple Store in France:

According to a trustworthy source in France, Philippe Starck is actually working on a design for a future Apple Store. I wasn’t able to get more details out of my contact, but I do trust her. And from what I hear, this is hardly a secret in the small French world of design and architecture.

Believe what you want, but we’ll find out the truth soon in ‘8 months’.

2022 was the worst year for the global smartphone market since 2013, with shipments dropping 11.3% in the year to 1.21 billion units and 18.3% in the fourth quarter alone, according to preliminary data from the International Data Corporation (IDC). While Samsung led global smartphone shipments for 2022, Apple came in second place with 226.4...
Nehal Malik
7 mins ago