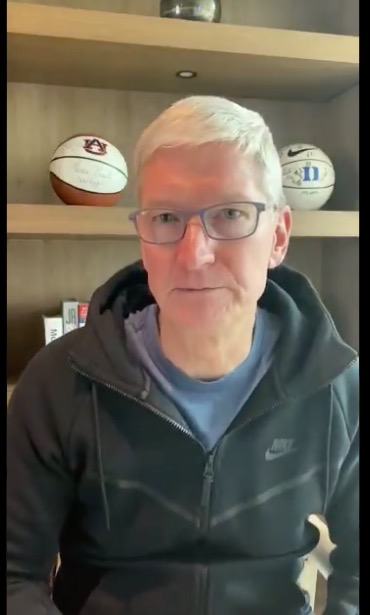 Apple CEO Tim Cook has released a video announcement today, detailing how the company has “sourced, procured and donating” 10 million N95 masks to medical workers in the United States and Europe.

In a 1-minute video filmed in portrait orientation, Cook spreads the social distancing message to stay at least 6-feet away from others if you venture out, but everyone should be staying and working from home.

Proud to share we’ve been able to source 10M masks for the US and millions more for the hardest hit regions in Europe. Our ops teams are helping to find and purchase masks from our supply chain in coordination with governments around the world. pic.twitter.com/uTsA6eA5ks

He also gives a shoutout to recognize warehouse and delivery workers, along with those stocking shelves in grocery stores and pharmacies, saying we owe them the same “debut of gratitude” as medical workers, too.

“It’s in these toughest times that we show our greatest strength and I know that we’ll rise to the occasion. Thank you and stay safe and healthy out there,” concluded Cook.

In a press briefing yesterday, U.S. Vice President Mike Pence said Apple was donating 9 million masks, but now according to Cook, that number is at 10 million.