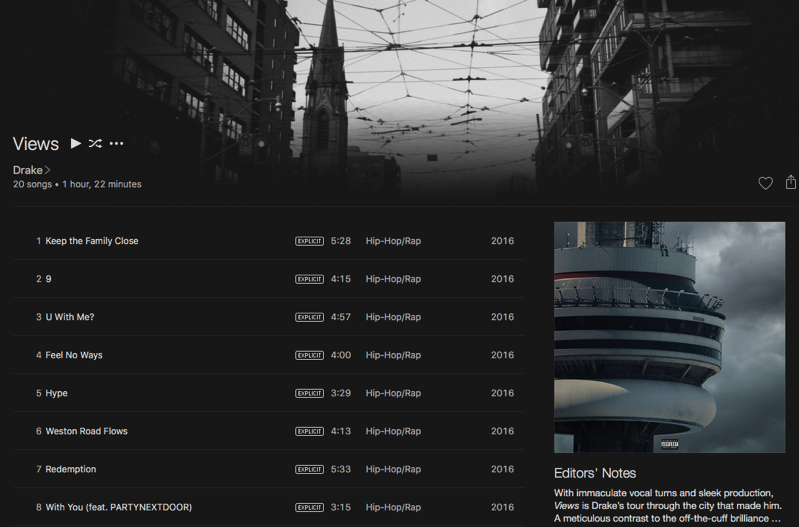 Just five days of exclusivity on the iTunes Store has brought Drake more than a million sales of his new album “Views”, reports the Wall Street Journal. That’s quite an impressive performance given the downward trend of music downloads, as previously cited music industry experts reveal.

But this is just the number of sales. The company also owns a music streaming service, Apple Music, and the Wall Street Journal article shares that data, as well:

Apple Music users streamed the album more than 250 million times world-wide, 200 million of those times in the U.S., suggesting that Apple Music was able to get a good number of customers to sign up for free trials of its paid-only service beyond its current roughly 13 million paying subscribers and several million existing trial users. The exclusive release on Apple Music could hook more fans on subscription streaming than have releases on Spotify AB, which allows customers to use a free version indefinitely.

Contributing to Drake’s first-week success are the dozens of employees of his record label’s parent company, which continuously monitored various channels for pirated content:

Also driving Drake’s sales and subscription streaming: his record label’s parent company, Vivendi SA’s Universal Music Group, employed dozens of staff to keep “Views” videos off sites such as Alphabet Inc.’s free YouTube where they have been uploaded by users without permission, a labor-intensive process on which the record company spends millions of dollars a year to protect its big releases, a person familiar with the matter said.

Apple and Drake had a contract for a radio show, sponsorship of his upcoming tour, and marketing of his recording music by the time Apple Music was launched, people familiar with the matter have told the WSJ. Negotiations for exclusive rights to Drake’s albums started six months ago.