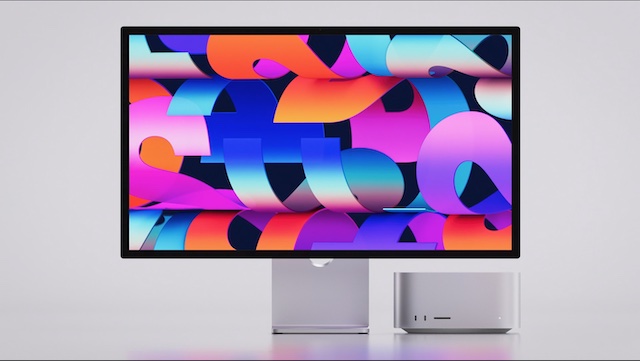 “We look very much at Mac Studio for what it is, a completely new Mac product line. Which is rare. We don’t add product lines to the Mac very often,” said Boger. He added that Apple wanted to bring it to those users “who want performance and conductivity and a modular system.”

Soren noted that there was a clear signal from its creative and pro users that there was a need for a modular system that fell in between the iMac and the Mac Pro. Modular, in this sense, consisting of the Mac Studio offering two levels of M1 chip and a paired Studio Display.

“I think the way we look at it is we’re happy to provide multiple ways for our users to work,” Boger says. “So you could decide to have a MacBook Pro with an M1 Max chip in it and you could decide to have a setup in your studio where you bring the MacBook Pro back and forth. And if that’s the way that you choose to work, great. But we also have users that prefer to have that desktop that always lives on their desk.”

The execs argued that Mac Studio was about giving users an extensive array of connectivity while still hitting what they feel like “a sweet spot in the number of ports for the vast majority of users.” You can catch the interview in its entirety at the source page.