Apple executives such as Phil Schiller, Craig Federighi and Bud Tribble have started to provide interviews to the press on the 30th anniversary of the Mac, providing discussion on how the original Macintosh has evolved over the past three decades.

Macworld has a lengthy interview with all three, with Schiller mentioning below how Apple’s Mac has outlasted its competitors over the years:

“Every company that made computers when we started the Mac, they’re all gone,” said Philip Schiller, Apple’s senior vice president of worldwide marketing, in an interview on Apple’s Cupertino campus Thursday. “We’re the only one left. We’re still doing it, and growing faster than the rest of the PC industry because of that willingness to reinvent ourselves over and over.”

“There were so many things of value in the original Mac that it is still recognizable,”

Bud Tribble, Apple’s vice president of software technology and one of the original members of the Macintosh team, emphasized how ease-of-use DNA within the computer has helped it last so long:

“An incredible amount of thought and creativity went into the original Mac metaphor,” Tribble said. “So there are some extremely strong threads of DNA that have lasted for 30 years. The sign of the strength of them and the underlying principles behind them—that the Mac should be easily approachable and learnable by just looking at it, that it should bend to the will of the person and not bend the person’s will to the technology—those underlying threads also apply to our other products.”

Speaking with the Wall Street Journal, Tribble noted how the “post-PC era” term is misleading because he believes the PC isn’t going anywhere; rather it just won’t be the only way to do computing tasks.

Schiller told the WSJ “performance differences between mobile devices and PCs aren’t a determining differentiation anymore,” but rather now “It’s about form factor and what fits different parts of your life.”

Craig Federighi, Apple’s senior vice president for software engineering, told the WSJ the cloud has replaced the central role of the Mac, thus making all devices “peers” to the computer instead of acting as “satellites”.

ABC World News with Diane Sawyer will air a rare interview with Apple CEO Tim Cook tomorrow evening at 6:30PM EST (via 9to5Mac) which will presumably detail the new Mac Pro, which is proudly made in the USA. 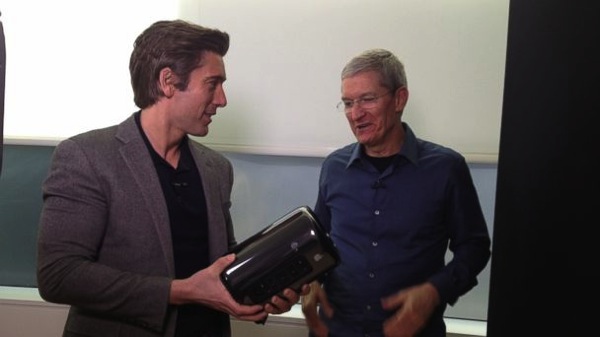