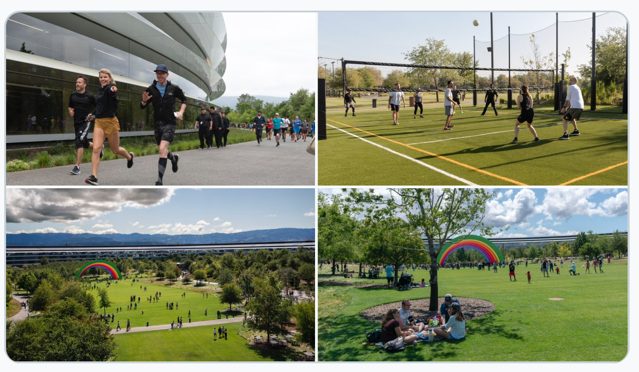 Apple is facing resistance from employees after the company last week announced a new return-to-office deadline of September 5 — reports the Financial Times.

The tech giant is once again asking corporate employees to return to offices for at least three days a week. Workers are currently only required to go into their offices two days a week.

Apple has been trying to get employees back into offices since at least June 2021, but its plans have been repeatedly put on hold by COVID-19 spikes.

Last week, an order from Apple CEO Tim Cook instructed employees to work from their offices on Tuesdays, Thursdays, and a third day determined individually by teams, starting with Apple’s Cupertino, California, campus on September 5.

Cook said he wanted to preserve the “in-person collaboration that is so essential to our culture.”

However, many of Apple’s workers don’t see the need to increase how much time they spend in offices. Apple Together, a group of Apple employees formed last year when the company transitioned to remote work, started circulating an internal petition on Sunday for “location flexible work.”

“We believe that Apple should encourage, not prohibit, flexible work to build a more diverse and successful company where we can feel comfortable to ‘think different’ together,” the Apple petition said.

Apple Together argued that a “uniform mandate from senior leadership” does not take into account the “many compelling reasons” why some employees are “happier and more productive” under flexible work dynamics.

One Apple employee told the Financial Times that Apple Together plans to send the results of the petition to executives.

“At this juncture we will not be releasing any specific names of individuals publicly or to exec leadership to protect our colleagues, especially in light of retail union busting and recent reports of allegations of retaliation from HR,” the anonymous employee said.

Tech companies are taking a variety of different approaches to post-COVID work arrangements. Companies like Facebook and Amazon have decided to be more flexible in allowing remote work, while Airbnb has permanently shifted to a more flexible remote work dynamic for all of its workers.

Apple hasn’t been as stringent about returning to offices as Tesla, whose CEO Elon Musk said earlier this year that employees who don’t put in 40 hours a week at offices will be assumed to “have resigned.” However, the company has made its desire to boost in-person work pretty clear.

More than 10,000 Apple employees have reportedly joined an internal Slack channel for “Remote Work Advocacy.” Apple in May also lost its Director of Machine Learning, Ian Goodfellow, to Google because of its return to work policy.