Apple’s iPhone upgrade program has helped the company “sweeten” the 6s and 6s Plus pricing in the US, but that wasn’t enough to stop the company from reporting the first double-digit decline in handset sales year-over-year, says market research firm Gartner. Apple reported the sale of 51.2 million iPhones for the first calendar quarter of 2016, and as such its global market share dropped by more than 3% compared to the same period a year ago to 14.8%, Gartner has found (via Forbes). 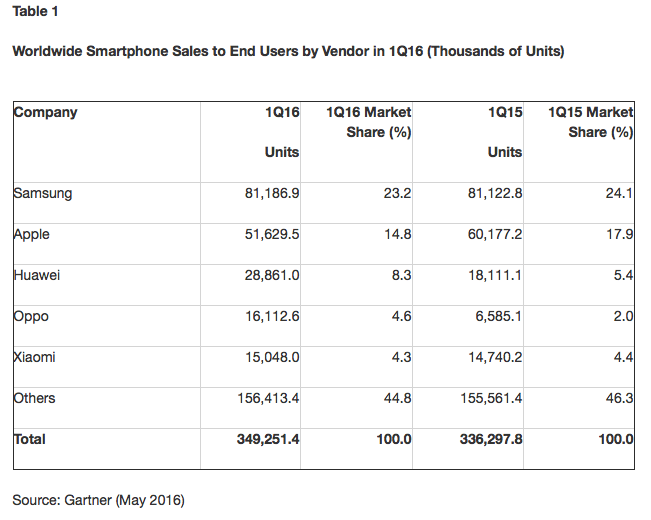 Overall smartphone manufacturers shipped 349 million units in the first three months of 2016, a 3.9% increase over the same period prior year, the firm says. Smartphones accounted for 78% of total mobile phone sales in the period.

Samsung extended its lead over Apple in Q1 with 23.2% market share, although it is slightly down year-over-year, as the OEM controlled 24.1% of the global smartphone market according to Gartner’s data. The Samsung Galaxy S7 series phones turned to be a successful launch, at least according to the market research firm.

In the top five smartphone OEMs list we find Huawei in the third spot, Oppo in the fourth and Xiaomi in the fifth. Lenovo has disappeared both from the top five and top 10 mobile phone vendor lists, as it has seen a significant 33% decline in smartphone sales in Q1 2016.

When it comes to smartphone OS, Android gained more market share in the aforementioned period and accounts for 84.1% of the shipped smartphones, while Windows for a small 0.7%, and BlackBerry for 0.2%.