According to some new court documents obtained by Pando Daily, it seems that in addition to Apple and Google, a dozen other hi-tech companies with combined workforces of over one million employees, have been found involved in illegally fixing the labor market. Among the companies included in the conspiracy are Dell, IBM, eBay, Microsoft, Comcast, Clear Channel, Dreamworks, and London-based PR giant WPP. 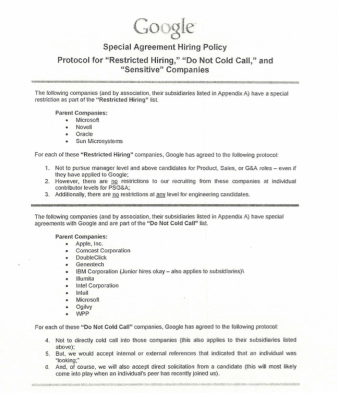 The source notes that it all began as a secret cartel agreement between late Apple CEO Steve Jobs and Google’s Eric Schmidt to fix the wages of thousands of tech employees. However, confidential court memos reveal that a number of other big companies also formed part of their wage-fixing cartel within a few years. Documents also show that some of these other companies who did not sign reciprocal non-solicitation agreements, were instead added by Google and others to “Do Not Cold Call” or similar “Sensitive” company lists.

A confidential Google memo titled “Special Agreement Hiring Policy,” dating from November 2006, divides the company’s wage-fixing agreements into two categories: “Do Not Cold Call” and “Sensitive Companies.” Below that, the Google memo offers a brief chronology and list of companies:

The following companies have special agreements with Google and are part of the “Do Not Cold Call” list.

The first entry marks the beginning of Google’s participation in the wage-suppression scheme:

The “effective date” of Google’s first wage-fixing agreements, early March 2005, follows a few weeks after Steve Jobs threatened Google’s Sergey Brin to stop all recruiting at Apple: “if you hire a single one of these people,” Jobs emailed Brin, “that means war.”

So far, several of these newly named companies have already been subpoenaed by the DOJ for their investigation.