While the overall stock market is reportedly down, Apple’s stock (AAPL : US $632) continues to climb at a steady pace, taking the company’s total market capital to over $600 billion today. While some analysts are expecting Apple to hit the trillion dollar market capitalization by 2014, the company is already closing fast on snatching Microsoft’s title of being most valuable publicly-traded company ever, a record which was set at market cap of $619 billion in 2000. 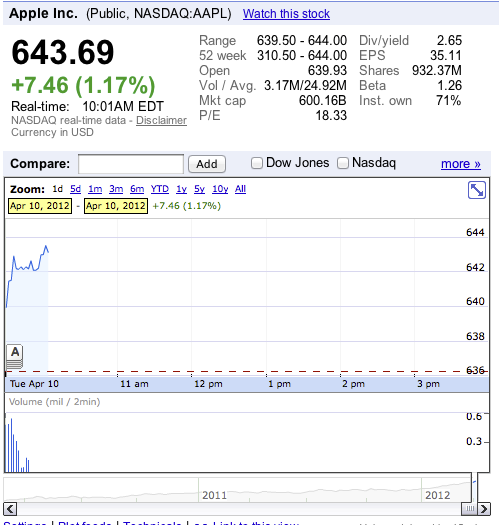 As noted by 9to5Mac:

At the time of this writing, Microsoft is sitting at a $250 billion market cap. If some analysts are to be believed, the AAPL train will keep rolling to a $1 trillion market cap in the coming years.

Apple now dwarfs the No. 2 company, Exxon, by a comfortable $200 billion. We are looking forward to April 24 when Apple will talk Q2 2012 numbers.

Interestingly, Microsoft’s market capitalization in 2000 would correspond to over $800 billion in today’s dollars. Wow!