For those accessing iTunes today, you may have noticed Apple has added extra security to your iTunes Account by asking you to fill out three security questions and input an alternate recovery email address, as noted by numerous twitter followers (thanks @einsteinbqat) and ourselves this morning. 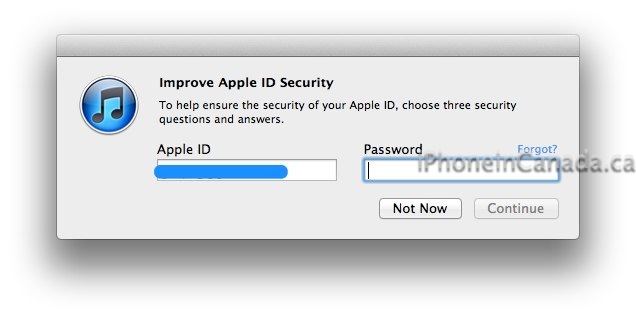 Also, there is a space to add an optional rescue email address, to reset your info should your Apple ID email be compromised. At the bottom of the form, it reads “Apple uses industry-standard encryption to protect the confidentiality of your personal information.”

Here are some sample questions asked below. If you’re smart, don’t make your answers obvious:

Just a couple weeks ago, Wired reporter Mat Honan’s had his iCloud account compromised by a hacker that was able to use ‘social networking’ to convince an Apple phone support employee to reset his account. In response, Apple suspended phone password resets for 24 hours.

With these additional security questions now being asked in the event of account recovery, and the additional rescue email option, it should increase Apple ID security. But of course, nothing can beat a strong password, which Apple ID accounts now require a capital letter and numbers.

Let us know if you’ve filled out your three additional security questions.