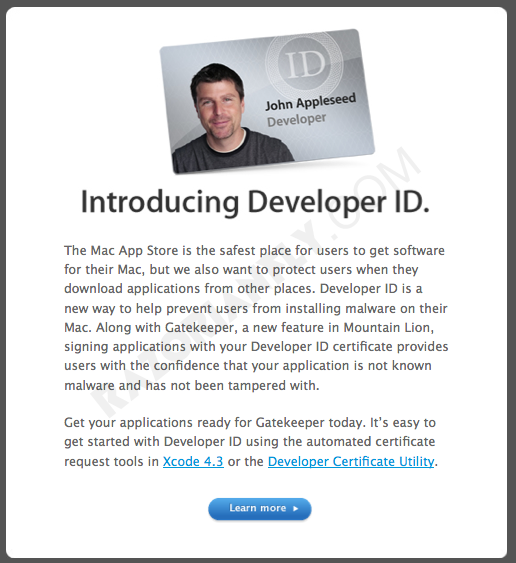 As part of OS X Mountain Lion, the Gatekeeper feature protects users from installing malware on their Mac. To help verify approved developers, Apple has now sent out an email to Mac App Store developers notify them of an upcoming ‘Developer ID’.

The Mac App Store is the safest place for users to get software for their Mac, but we also want to protect users when they download applications from other places. Developer ID is a new way to help prevent users from installing malware on their Mac. Along with Gatekeeper, a new feature in Mountain Lion, signing applications with your Developer ID certificate provides users with the confidence that your application is not known malware and has not been tampered with.

The Mac App Store launched in January of 2011, and took numerous cues from the App Store. It appears the introduction of the Developer ID is another way for Apple to protect customers from installing unauthorized software on their Macs. It’s great to see John Appleseed is still working hard at Apple.