Apple Investors Shaved $43 Billion Off the Company in One Day 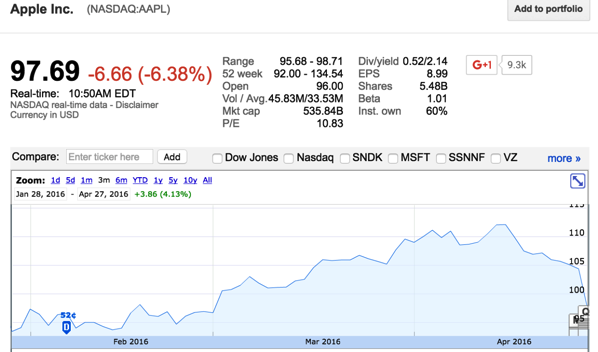 Apple’s stock (AAPL) opened at $96 today, which is down 8% compared to yesterday’s closing price of $104.35, something that doesn’t usually happen for giant companies like Apple. According to TechCrunch, Apple investors have shaved around $43 billion off the company’s market capitalisation in just one night.

“But because this downswing is about Apple, 8 percent represents a lot of money. It’s unclear what’s next for Apple. iOS is one of the two dominant platforms and Apple is comfortably selling tens of millions of iPhones every quarter. It’s a huge money-making business. But investors only want to hear about growth, growth and growth”.

Apple has seen similar drops in the past as well such as in 2013, it saw a drop of 10%. However, this time the investors are afraid “they’ve hit peak iPhone”. This quarter was Apple’s first year-over-year sales dip when it comes to iPhone sales.