In case you are wondering how many iPads did Apple sell during the first financial quarter of 2014, analysts are estimating that the number may be somewhere between 21 million to 28 million, according to Fortune’s Philip Elmer-Dewitt. The author calls the iPad to be Apple’s second biggest ‘cash cow’ i.e if the iPhone generates a bit more than $5 of every $10 Apple collects, the iPad brings in nearly $2. And for both products, the holiday quarter is the biggest one. 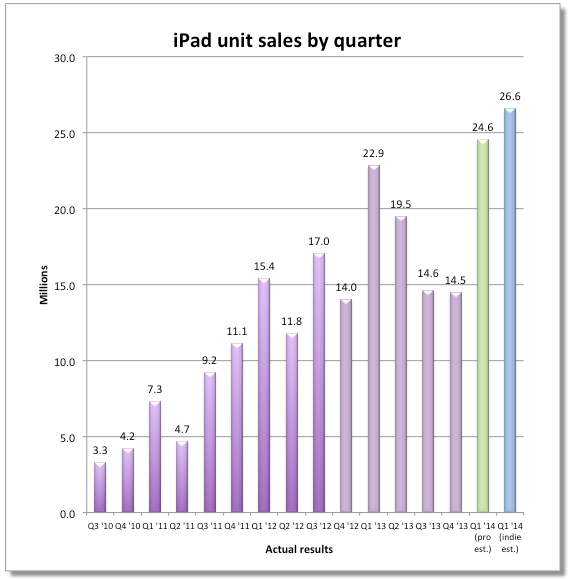 It seems that average estimate among all the analysts regarding the iPad sales is 25 million, which is up 10% from the same quarter last year, though iPad sales are harder to estimate than the iPhone’s this year. The iPad Air didn’t ship until Nov. 1, missing one third of the quarter, while the new iPad Mini with Retina display showed up 12 days later and was in short supply all the way through Christmas. Nonetheless, the author managed to collect unit sales estimates from 45 Apple analysts, out of which 28 are professionals and 17 are amateurs.

The indies, as usual, are a bit more bullish than the pros. As a group, they’re looking for 16% growth, compared with the Street’s 8%. Unless they’ve updated their numbers, four sell-side analysts — Cowan’s Timothy Arcuri, Credit Suisse’s Kulbinder Garcha, Citi’s Glen Yeung and CLSA’s Avi Silver — still expect Apple to report a drop in iPad sales.

Last year, the pros were right and the indies wrong.The consensus was 24 million iPads, with the pros at 22.8 million and the amateurs at 25.5 million. The correct number, according to Apple, was 22.86 million.

Apple is set to report its Q1 2014 earnings after the markets close on Monday, Jan. 27

Twitter Blue has once again been working on bringing its edit button to the fold. In a new tweet, the premium subscription of the social media platform shows off how the edit function will work both in terms of the user tweeting as well as the general audience seeing the changes. Earlier in September, Twitter...
Steve Vegvari
34 mins ago