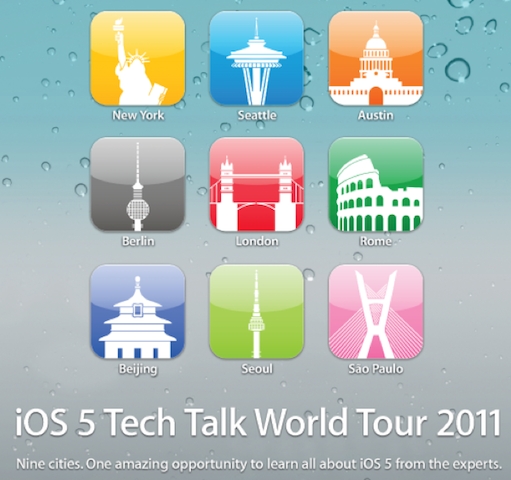 Apple has just sent out an email to its developers to broadcast the iOS 5 Tech Talk World Tour 2011. This event will span 9 cities across the globe to help developers learn from Apple experts.

If you’re in the iOS Developer Program, you are eligible to attend, but preference will be for those with an app in the App Store.

The schedule is as follows:

For Canadians, the closest locations would be Seattle and New York, however NYC is already sold out. Click here to check out a PDF of the Tech Talk Agenda, and let us know if your application to attend is accepted.

[caption id="attachment_389886" align="aligncenter" width="1200"] Image: LCG Auctions[/caption] A rare, factory-sealed original iPhone from 2007 in mint condition is up for bidding at New Orleans-based LCG Auctions' 2023 Winter Premier Auction, which will run through February 19 at LCGAuctions.com. According to LCG Auctions, the item could ultimately fetch more than $50,000 USD. The same auction house...
Nehal Malik
56 mins ago