Apple Lawyers: Give Us the iPhone Back

Well, here we go again. The ‘leaked iPhone’ story thickens as Apple has finally broken its silence and requested to Gizmodo to return the iPhone. The letter reads:

It has come to our attention that GIZMODO is currently in possession of a device that belongs to Apple. This letter constitutes a formal request that you return the device to Apple. Please let me know where to pick up the unit. 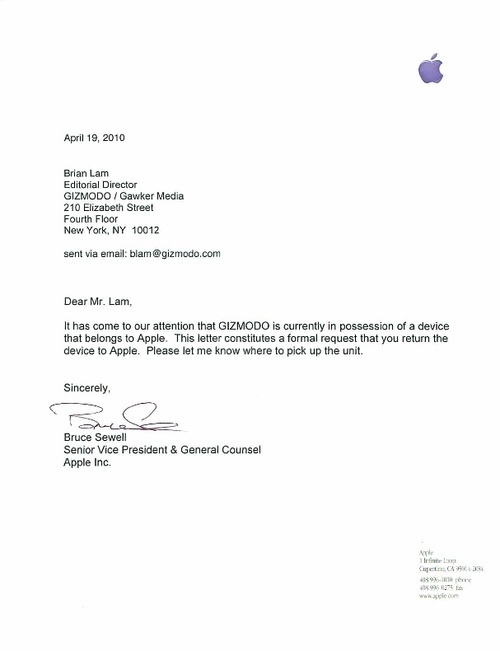 …and here is GIZMODO’S reply:

Bruce, thanks.
Here’s Jason Chen, who has the iPhone. And here’s his address. You two should coordinate a time.

Happy to have you pick this thing up. Was burning a hole in our pockets. Just so you know, we didn’t know this was stolen when we bought it. Now that we definitely know it’s not some knockoff, and it really is Apple’s, I’m happy to see it returned to its rightful owner.

P.S. I hope you take it easy on the kid who lost it. I don’t think he loves anything more than Apple.

Wow. Okay so Apple is getting their iPhone back. This entire ‘leaked’ iPhone story has been indeed TRUE. So, what can we expect in June when Apple releases their final build of the next iPhone? We’ll never know. But one thing is for certain–good luck seeing the Gizmodo guys being invited to the next Apple Event!

What’s your take on this whole situation?