Apple has inked a deal for a second spaceship-like headquarters, this time in Sunnyvale, California, the Silicon Valley Business Journal reports. The iPhone maker has inked a deal with Landbank Investments LLC, which two years ago bet that tech companies would be attracted by cutting-edge design and not by the Valley’s usual building typology. 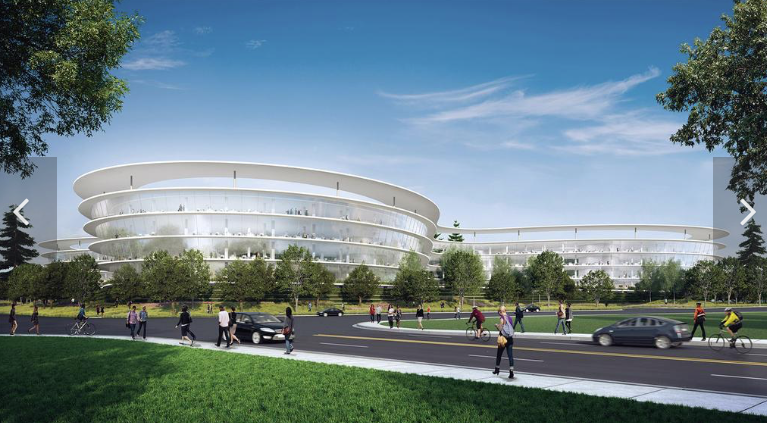 Landbank CEO Scott Jacobs’ bet paid off: The curvaceous, 777,000-square-foot project at Central Expressway and Wolfe Road has been leased by Apple, sources familiar with the matter have told the Business Journal.

The news comes after the SVBJ and The Registry both reported last month that Landbank and Apple were negotiating. While the deal has not yet been officially announced, sources say Apple’s expansion plan has another milestone fixed: the deal means that the company will potentially be able to provide room for more than 3,000 workers.

Under the approved design, the campus’s three connected main buildings will protrude from a central courtyard almost like flower petals, wrapped in a sweeping, curvilinear glass skin that appears to billow in and out. Park-like greenery rings the site rather than parking, with cars shunted either underground or to a parking garage tucked out of sight.

The deal follows important land-grabs in recent months, as previously reported, in Sunnyvale, Santa Clara and, not too long ago, in San Jose, where Apple has spent $300 million to assemble 70 acres. The SVBJ speculates that Apple’s expansion plan has to something to do with its next big product category, which is rumoured to be an electric car.

There is no word whether the project will stay as originally designed, or if Apple and Landbank will want to modify it. Also, it is unknown when construction will begin.