Apple is losing steam, which benefits Google, according to the latest report from leading valuation and strategy consultancy Brand Finance. Their latest study of the world’s most valuable brands concluded that the top spot belongs to Google, instead of Apple. And the most powerful brand in the world is Lego (via the Telegraph).

The yearly Global 500 rankings has found that Google’s brand value rose 24% to $109.5 billion last year, while Apple’s brand value dropped to $107 billion amid concern that people are losing faith in the tech giant’s ability to innovate.

“There are probably 50 or 60 analysts that follow Apple,” said David Haigh, the CEO of Brand Finance. “Some are very bullish, some are very pessimistic. What drives our valuation is consensus. We are reflecting what the market says and the market consensus is that the prospects of future turnover are worse than they were last year or the year before.” 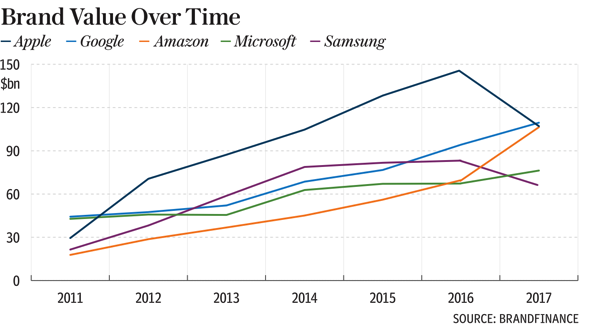 That places Google at the top of the rankings for the first time since 2011, as advertising revenue increased 20% last year, the firm has found. Brand Finance analyses factors such as brand loyalty, familiarity, corporate reputation and marketing investments when compiling its Global 500 list.

Amazon follows Apple in third place, while Facebook moved up from last year’s #17 to #9.

Brand Financial also evaluates which brands are the most powerful, and this year the crown went to Lego, followed by Google. Nike ranked third on the list. McDonalds, KFC and Domino’s Pizza continue to drop in the rankings, the firm has found. 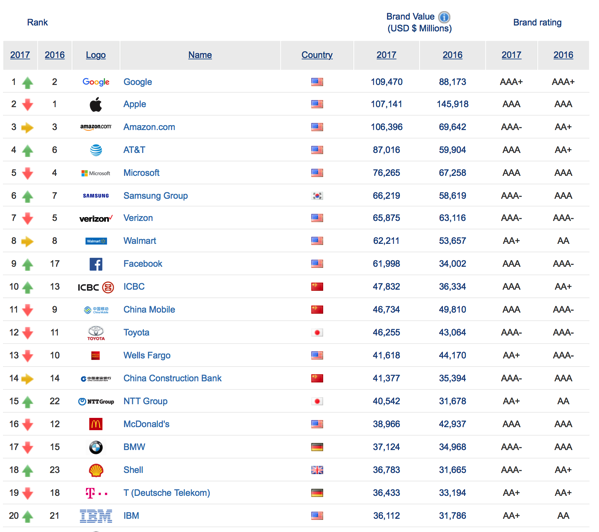