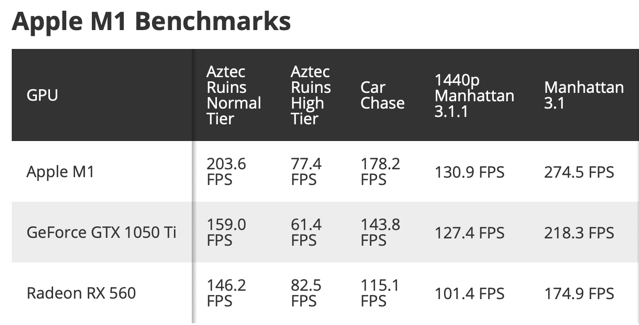 According to Tom’s Hardware, an anonymous user has tested the M1 under Apple’s Metal API. While no one has submitted a Metal run with the GeForce GTX 1650, there is a submission for the GeForce GTX 1050 Ti allowing the Pascal-powered graphics card to serve as the baseline.

In a clear victory, the Apple M1 bested the GeForce GTX 1050 Ti by a good margin.

The Radeon RX 560 didn’t stand a chance, either. Admittedly, the two discrete gaming graphics cards are pretty old by today’s standards, but that shouldn’t overshadow the fact that M1’s integrated graphics outperformed both 75W desktop graphics cards, but within a pretty tight TDP range of its own.

The M1 will debut in the upcoming new 13-inch MacBook Pro, the Macbook Air, and the Mac Mini.