Apple has announced the next version of macOS called Big Sur. It comes with a new redesign of icons, sounds and more.

The company says it has redesigned the Dock along with new icons for apps. Finder now has a new redesigned top to bottom design for the sidebar.

Mail has all-new glyphs, while there’s a new toolbar and expanding search bar. With Photos, the grid view is powered by Metal for smooth-scrolling.

Apple says there’s an all-new version of iWork with simplified toolbar, while the menu bar on the Mac is now translucent. 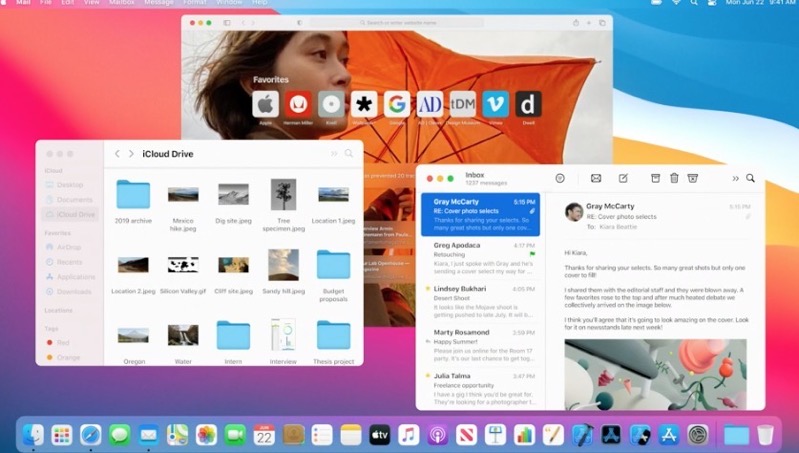 Notifications are now grouped together, while they can be cleared like on the iPhone and iPad. Widgets can also be organized better and new sizes are available. Developers can also bring their own widgets as well.

For Messages on the Mac, there’s now a powerful search. There’s a redesigned photo picker, plus Memojis can be created and edited on Mac. There’s now Messages effects, while pinned conversations synced across devices and better group chat.

Apple Maps on Mac will also be all-new on desktop as well. For the first time favourites are now available on Apple Maps on Mac. You can also create guides and checkout indoor maps and also the other new Maps features in iOS 14.

With Safari, there’s a new customizable start page, allowing you to set a background image, along with new sections such as iCloud Tabs and your Reading List items.

You can also enable new web Extensions, adding new buttons to Safari’s toolbar, with permissions set for privacy based on time. Apple says the update to Safari in macOS Big Sur is the biggest since 2003. The new Privacy Report in Safari provides users with details on trackers used on websites.

“macOS Big Sur is a major update that advances the legendary combination of the power of UNIX with the ease of use of the Mac, and delivers our biggest update to design in more than a decade,” said Craig Federighi, Apple’s senior vice president of Software Engineering. “With its modern and clean look, huge improvements to key apps including Safari, Messages, and Maps, and new privacy features, we think everyone is going to love the breakthrough experience that macOS Big Sur offers.”