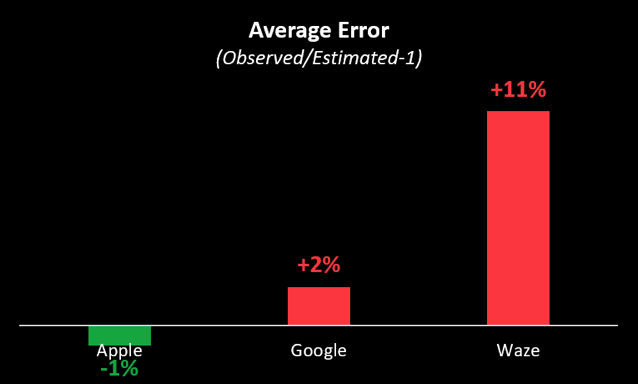 Without a doubt, Google Maps is the world’s most commonly used mobile navigation app. It even used to be iPhone’s default maps app until Apple Maps replaced it in iOS 6. Meanwhile, Waze has emerged as the best third-party alternative to both Google and Apple Maps in recent years.

To find out which of these three navigation apps actually gets you to your destination most quickly, a detailed comparison has been shared by arturrr, while also taking into account which navigation app estimates the shortest travel time and how does each app over or underestimate travel times.

I recorded 120 observations (i.e. trips) of navigation app estimated and observed performance. For each observation, I randomly selected to follow one of the three navigation apps and recorded:

The lengthy comparison concludes that if you want to get to your destination most quickly, Google Maps is the best option, but for those who want an accurate prediction from their navigation app to help them arrive at their destination on time, Apple Maps should be their top choice.

One interesting tidbit from Artur, is that Apple Maps ‘sandbags estimates’:

Average error results were the exact opposite of estimated trip time. Using Apple Maps, I on average arrived 1% faster than initially estimated, versus 2% slower with Google Maps and 11% slower with Waze. In other words, Apple sandbags its estimates so that users on average arrive at the predicted time or slightly sooner. Google and Waze are overly optimistic in their predictions and thus their users arrive later than expected.

For detailed methodology and comparison data, check out the source page.