Just ahead of its June-quarter earnings report, Apple’s shares have soared to new highs, boosting the company’s market cap to nearly $2.5 trillion, thanks in part to a flurry of bullish notes from top Wall Street analysts (via Barron’s). 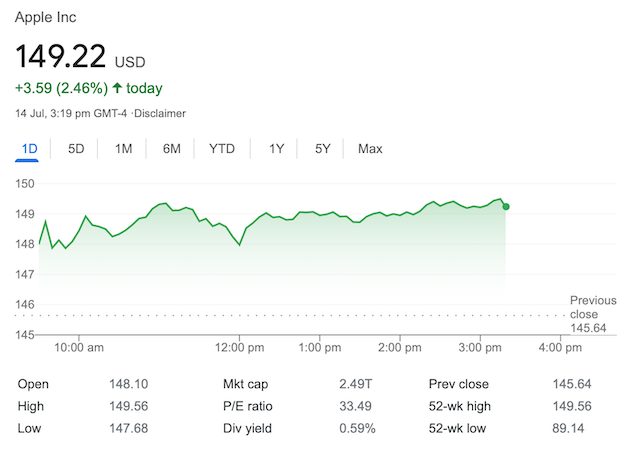 J.P. Morgan has repeated its Overweight rating on Apple shares, lifting the price target to $175 from $170 and adding it to the firm’s “analyst focus list.” Analyst Samik Chatterjee wrote that he sees “a path to Apple outperforming investor expectations over a longer time horizon rather than just the upcoming earnings print.”

Similarly, Citigroup analyst Jim Suva has repeated his Buy rating and $170 price target on Apple shares, while lifting his profit estimates for this quarter, next quarter, and both fiscal 2022 and fiscal 2023.

“Our independent research shows that many iPhone users are purchasing Apple’s newly launched AirTags and purchasing them in the 4 packs for $99 versus single purchases for $29,” Suva writes. “Importantly, many are also opting for key rings and loops.

The result is many are spending more on the accessories than the actual AirTags without fully realizing this due to the desire for fashion and appearance over function.”