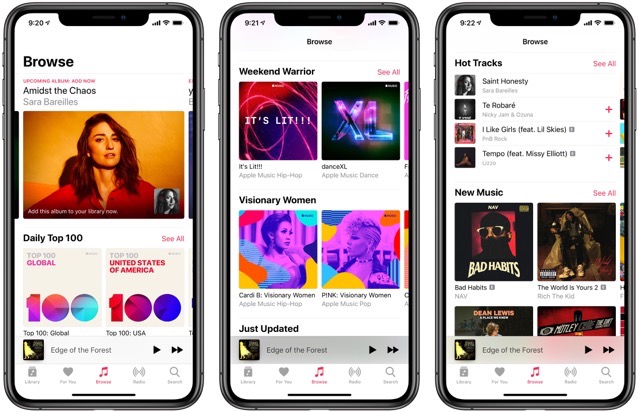 A revamped Browse tab has started rolling out in Apple Music today, that showcases a lot more content up front without requiring tapping through other menus first, as pointed out by MacStories.

When you launch the Browse tab and scroll down to the second section, you will now find Apple’s Daily Top 100 playlists, followed by thematic sections like Weekend Warrior and Visionary Women, then Just Updated, Hot Tracks, and New Music.

There are even more curated sections in the updated Browse tab, including We’re Loving, Get Down Tonight, On Beats 1, and Coming Soon:

“Several of the newly surfaced sections of Browse seem particularly relevant to the weekend, or to a specific culturally relevant topic, so it’ll be interesting to see how often Apple’s editorial team updates Browse with new sections to explore. The tab was refreshed regularly before, but it contained much less content than it does now, so there was less reason to check it out often.”

Do you think the updated Browse tab has the potential to become a near-daily destination for you?