Irish planning body An Bord Pleanála has finally given Apple the green signal to build the first data hall for its huge new data centre near the west coast of Ireland, BusinessInsider reports. Despite opposition from a number of individuals and local businesses, building plans for Apple’s data centre on a 197-hectare site have been approved, although the company has received planning permission to build just one data hall so far. 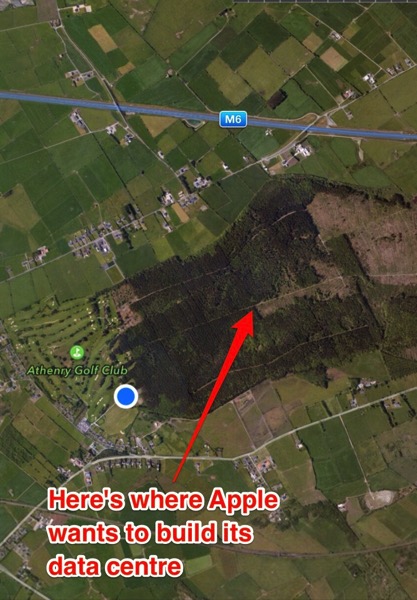 Apple is hoping to build a total of eight data halls on the site over the next 10-15 years, and will apply for planning permission every time it wants to open a new one. The planning body announced that Apple’s data center will provide the area with a significant economic boost, adding that they took into account how hard it is to find sites that are able to accommodate huge data centers that need to be connected to the national grid.

The facility will employ over 200 people in the building of the data center, while a significantly smaller number of IT workers and data center technicians will operate the facility when it’s built.

The facility will be built in the middle of a forest just outside the small town of Athenry in County Galway. It will initially consist of a single data hall, an administration building, and other associated developments.

The data center — which Apple says will be totally powered by renewable energy — will be built on land that state forestry company Coillte used for growing and harvesting non-native trees. Apple plans to restore native trees to Derrydonnell Forest and create an outdoor education space for local schools, as well as a walking trail for the community.

Apple initially wanted to have the facility up and running by early 2017, but that target date now looks unrealistic given any building work is yet to begin.