Apple Park, the iPhone maker’s new ‘spaceship’ home in Cupertino, with a centerpiece worth $5 billion consisting of a four-story, 2.8 million-square-foot ring, which can be seen from the space as well, is still getting some final touches. However, the development of the 175-acre headquarters has already helped transform the surrounding area (via The New York Times). 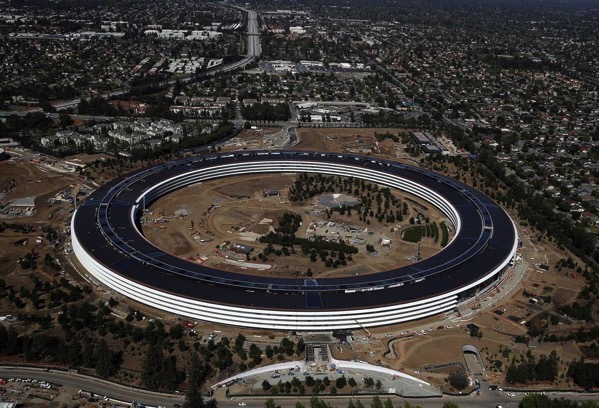 A total of 95 development projects are in the planning stages in Sunnyvale, a town just across the street. Deanna J. Santana, the city manager, said that she had never seen such action before. City officials and residents say this project is like nothing they’ve seen before. It is even bringing tourists. Onlookers snap pictures of the spaceship from the streets. TV helicopters circle above. However, not everyone is thrilled about the Apple Park.

Residents of Birdland, an 877-home neighborhood, have been particularly vocal. They have complained about early-morning construction rigs that beep and rumble along major streets, unpredictable road closings, unsightly green sheeted barriers, and construction potholes that result in punctured tires.

The price of property in the neighborhood has also become a source of some worry. Sunnyvale and Cupertino, like many other Silicon Valley towns, have had an extended real estate boom, as the tech industry has expanded. Prices in the area really started to rise, real estate agents and residents said, after Apple released its plans.

Once the construction is completed, many of the public views will also go away. Apple Park will eventually have 9,000 trees, filling in much of the big open spaces. The public will instead have access to a visitors center with a cafe, a store, and rooftop observation views.