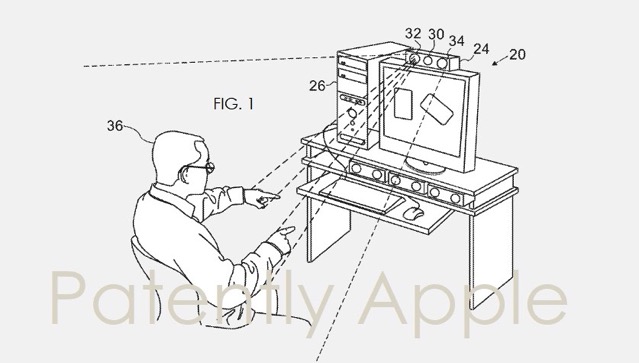 A new Apple patent granted today by the United States Patent and Trademark Office (USPTO) has detailed facial recognition and gesture control for the Mac, suggesting that Face ID should be coming soon to Apple’s notebooks (via 9to5Mac).

Today’s patent also references to an earlier Apple patent application, which describes a clever way of allowing Macs to automatically log users in, even if they were in sleep mode when approached. “If your Mac spots a face, it then uses facial recognition to wake the Mac if the user is identified”.

As another example, the computer may apply a face detection algorithm at step 92 in order to detect the subject’s face of the depth map.

While the newly granted patent references face-detection almost in passing, most of it relates to using gestures to control a Mac. The patent details how body language more generally – head, torso, and arm – could be used to used to signal intent to the Mac, although most of its focus remains on the mechanisms used to create the depth maps.

Depth maps may be processed in order to segment and identify objects in the scene. Identification of humanoid forms (meaning 3D shapes whose structure resembles that of a human being) in a depth map, and changes in these forms from scene to scene, may be used as a means for controlling computer applications.

Interestingly, the inventors named in that patent were from PrimeSense, the company that developed Microsoft’s Kinect sensor and was acquired by Apple in 2013. More information is available here.

Apple today announced its fiscal Q1 2023 financial results for the period that ended December 24, 2022, recording a new all-time high for the quarter. The iPhone maker reported $117.2 billion USD in revenue for the first fiscal quarter of the year, down 5% year-over-year, with earnings per diluted share of $1.88. Apple reported a net...
Nehal Malik
18 mins ago