Apple’s Q3 2014 By the Numbers: Tim Cook Not Worried About iPad Sales

Apple this afternoon announced their Q3 2014 earnings, which saw a record profit of $7.7 billion in the quarter, as the company sold 35.2 million iPhones, part of $37.4 billion in total revenue, along with 13.2 million iPads, 4.4 million Macs and 2.9 million iPods sold.

Here are some interesting numbers from the Q3 2014 live earnings call (via ArsTechnica and TUAW): 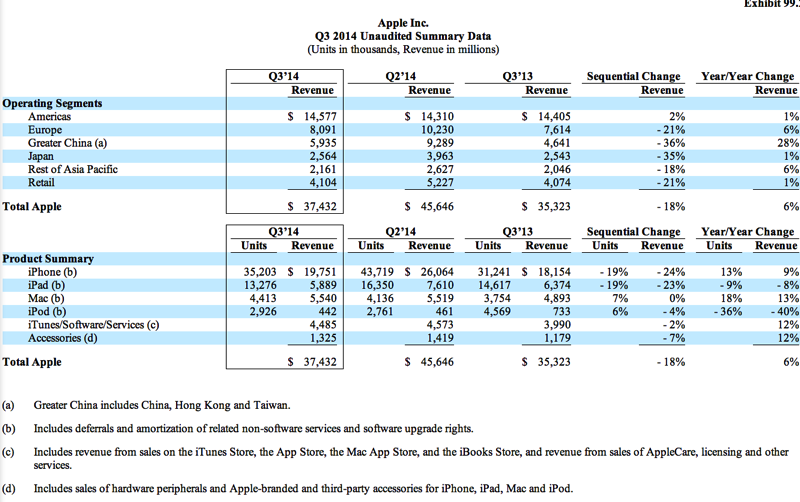 In an interview with the Wall Street Journal regarding declining iPad sales, CEO Tim Cook said the numbers were what the company had projected and “This isn’t something that worries us.”

Cook cited one reason for the decline, and that was the quarter ending in June normally concentrated on “higher education” sales, meaning Macs are more popular. Where the iPad outsells the Mac is in the age range of high school and lower, where tablet numbers are two-and-a-half fold compared to the Mac.

Despite the sales decline on paper, Cook clarified iPad revenue growth exceeded 40% in developing markets such as China and the Middle East.

Also, there is still room to grow in the enterprise, as Apple only has 20% marketshare compared to 60% for notebooks. Of course, with the recent partnership announcement with IBM, Apple hopes to get more iPads and business-friendly apps into the corporate sector.

The third quarter is normally a time when people are holding off upgrades and purchases as they know new products are coming in the fall. Even with that in mind, Apple still sold 35.2 million iPhones and had a record $7.7 billion in profit for the quarter.

Today the first press reviews of Apple’s HomePod 2 hit the web, along with unboxing videos. The second-generation HomePod sports a similar design as its predecessor, has a 4-inch woofer and five tweeters (down 2 from before), plus gains a built-in temperature and humidity sensor, along with automatic room sensing for adjusting audio to your […]
Gary Ng
7 mins ago

Apple’s second-generation HomePod is set to launch on Friday, February 3, and ahead of the debut, the embargo has lifted on the first press reviews. HomePod 2 has the same price as its predecessor before the latter was axed, but this time supports Spatial Audio and room sensing for automatically-tuned sound, to go with a […]
Gary Ng
27 mins ago