Today, Apple has released iOS 4.3.2 for iOS devices. The firmware was originally rumored to be released next week, but it seems Apple may be ahead of schedule.

The update is available for the iPad (1/2), iPhone 3GS/4 (GSM), and iPod touch (3rd/4th generation). Users can update their devices by connecting them to iTunes and clicking “Check for Update”.

As usual, jailbreakers/unlockers should avoid iOS 4.3.2 until further notice. 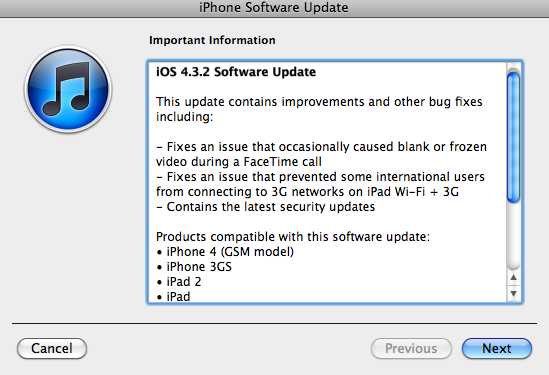 LG is expanding the availability of Apple TV, Apple Music, AirPlay, and HomeKit support on third-party webOS Hub-enables displays. Over 100 countries and regions will now be able to take advantage of Apple's entertainment options on a growing list of third-party displays. Apple's apps such as Apple TV are currently available on LG's display and...
Steve Vegvari
46 mins ago