Greenpeace has released a report (as noted by AppleInsider) that targets the environmental impact of the growing number of massive data centres that store our data online in the ‘cloud’. Apple is one of the companies criticized, and is included in one of the key findings of the study to use dirty energy:

Three of the largest IT companies building their business around the cloud – Amazon, Apple and Microsoft – are all rapidly expanding without adequate regard to source of electricity, and rely heavily on dirty energy to power their clouds.

Amazon, Apple, and Twitter were had some of the lowest ‘Company Scorecard’ ratings. Apple received an ‘F’ when it came to its Infrastructure Siting:

Apple’s two most recent data center announcements to power the iCloud (Maiden, NC and Prineville, OR) highlight the urgent need for a rapidly expanding cloud company to establish a siting policy with access to renewable energy as a key criteria. The absence of such a policy or strong corporate goal to guide Apple has resulted in iCloud data centers being built in regions served by dirty utilities that are heavily (50-60%) reliant on coal. 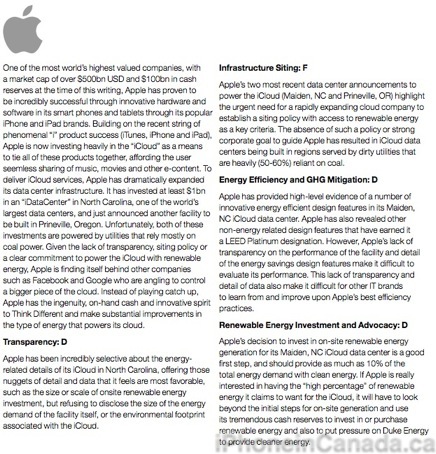 Apple has responded to the Greenpeace report, and released a statement to the New York Times. :

In a statement issued in response to the report, Apple disclosed for the first time that the data center would consume about 20 million watts at full capacity — much lower than Greenpeace’s estimate, which is 100 million watts. In territory served by Duke, a million watts is enough to power 750 to 1,000 homes.

Kristin Huguet, a spokeswoman for Apple, added that the company is building two large projects intended to offset energy use from the grid in North Carolina: an array of solar panels and a set of fuel cells.

Fuel cells are a technology that can produce relatively clean energy using fuels ranging from natural gas to so-called biogas — for example, emissions from landfills. Ms. Huguet said that the fuel cells would be powered by biogas and that together, the solar panels and fuel cells would supply a substantial percentage of the electricity needed by the data center.

Here is the full report card for the companies Greenpeace outed in the report: 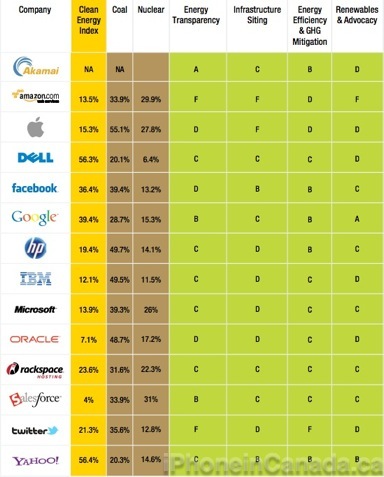 As we continue to get further entrenched into cloud storage for our data, it only make sense for Greenpeace to question the cleanliness of these massive data centres. We have heard numerous times before about Apple’s plans to implement solar panels as part of ‘Project Dolphin’ for its newly minted Maiden, North Carolina data centre, and also its upcoming new ‘spaceship’ campus that was envisioned by the late Steve Jobs.