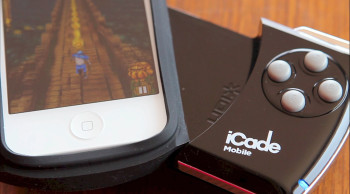 Pocketgamer.biz reports Apple is set to launch an official gaming joypad, according to its anonymous developer sources at the 2013 Game Developers Conference in San Francisco.

…Apple has been active during the conference talking to developers about its plans and ensuring plenty of games will support the joypad at launch.

It’s been operating a meeting room at the show, albeit booked under a pseudonym company name to avoid media attention.

Multiple anonymous developers confirmed the news to the site, with Apple expected to announce the gaming accessory at an April press event. No one has seen or held the alleged gaming pad, which is obvious consider Apple’s secrecy over unreleased products.

Although Apple’s multi-touch is by far the best in the industry, nothing beats a physical gaming controller. Back in April of last year, AnandTech revealed they had knowledge of an Apple game controller, fuelling speculation one could be released in the near future. The third-party market has become quite popular over the years, as we have seen offerings such as the Ion iCade Mobile.

An iOS gaming controller would bring a new dimension to the way titles are played on the iPad and even when connected to an Apple TV. A fantasy for many would be for Apple to release a physical gaming controller at the same time when Nintendo decides to port its entire NES, SNES and N64 library to the App Store–but that’s wishful thinking.

IDC reported in February combined iOS and Android game spending had already surpassed that of traditional handhelds. Are you interested in a dedicated gaming controller from Apple?

Update: This story has been struck down by Jim Dalrymple from The Loop with a “nope”.

Apple, Google, Amazon, Meta, and Microsoft have all joined the University of Illinois (UIUC)'s Speech Accessibility Project to improve voice recognition algorithms for users with disabilities that affect speech and those with diverse speech patterns — reports Engadget. The tech giants are also joined by nonprofits like The Davis Phinney Foundation and Team Gleason in...
Nehal Malik
28 mins ago