Apple and Google are slowly but steadily taking over the mobile gaming industry: Combined spending in the App Store and Google Play during the holiday quarter was higher than the spending on dedicated handheld devices, a joint report from IDC and App Annie reveals. 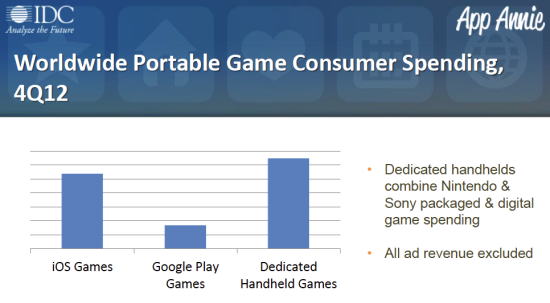 With games accounting for one third of iOS App Store and Google Play app downloads – the IDC survey reveals well over 20 billion game downloads for iOS and Android smartphones and tablets in 2012 – the total spending on games eclipsed that of dedicated handhelds.

Dedicated handheld game consumer spending turned out to be very seasonal, with 60% of the holiday quarter spending on Nintendo and Sony gaming software taking place in December, driven by consumers from Asia-Pacific.

North American spending accounted for 40% of the total amount spent in the App Store. Asia Pacific grabbed the second spot, while Europeans represented about a quarter of revenue for handheld systems. The majority of European gaming spending went to the App Store as well.

The top iOS game title went to Clash of Titans (free app), while Puzzle & Dragons (free app) turned to be the favourite of Android device owners. On dedicated handheld gaming devices, Pokémon Black / White Version 2 ($34.99) was the most sought after game.