According to the data provided by Apple in an annual report to California’s Department of Motor Vehicles, test drivers disengaged the autonomous mode on its cars once almost every mile. In comparison, Google’s Waymo cars went about 11,017 miles between disengagements, whereas GMC’s Cruise cars went 5,205 miles (via Bloomberg). 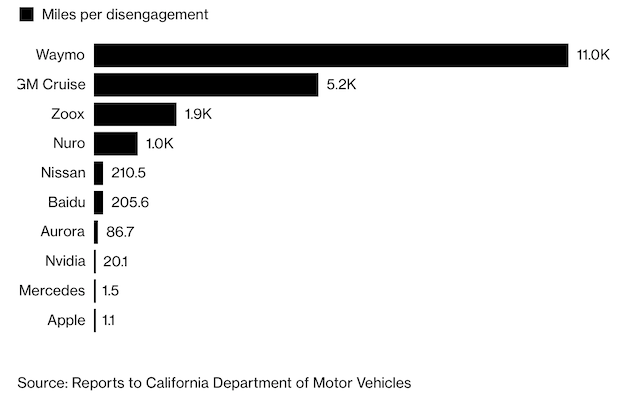 The fact that Apple’s self-driving cars are relying on significantly more human intervention than the competition could indicate the iPhone maker may be lagging well behind on the technology. It must, however, be noted that Apple started working on self-driving technology years after Waymo and others, and has been critical of California’s disengagement-reporting system.

Apple told the DMV in April 2017 that its reporting requirements are not enough to achieve the required results and that it should include other metrics, such as successfully prevented crashes.

The California reports, which measure how many times human safety drivers take back control or interfere with self-driving systems, are both rare and incomplete snapshots of how companies’ autonomous cars are coming along.

While Apple’s results suggest the company may be a straggler, its self-driving cars haven’t been involved in significant reported accidents. The cars have been involved in minor collisions that were determined to be the fault of other vehicles.

Companies that report to California have also made the argument that not all miles they test drive are comparable, noting that highway driving on sunny freeways is much easier than navigating city traffic or snowy mountain passes.

Apple has today highlighted how the company and its employees support organizations and communities around the world through volunteering, donations, and learning programs. Since its inception 11 years ago, Apple’s Employee Giving program has raised over $880 million dollars for almost 44,000 organizations globally. That includes the work of more than 76,000 employees who have...
Usman Qureshi
17 mins ago