Two Apple patent applications recently published by the European Patent Office relate to the convenience and efficiency of biometrics for authenticating users of electronic devices, as well as the use of both Face and Touch ID on the same iPhone (via Patently Apple). 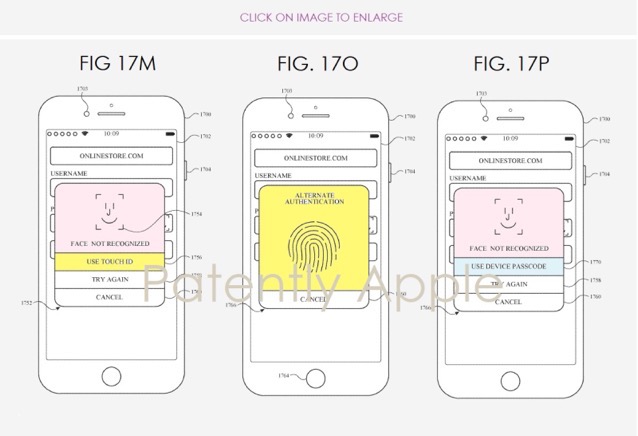 
With the introduction of 3D Face ID, Apple says the number of unnecessary or repetitive inputs has greatly reduced. Although the patent describes setting up Face ID and using it in different scenarios, for the most part, it also mentions using Touch ID as an alternative authentication method on the same device.

“In response to detecting the predefined operation and in accordance with a determination that biometric authentication (e.g., Touch ID, Face ID) via the one or more biometric sensors is available, the electronic device on the display … will cause credentials to be submitted via the credential submission user the interface element.”

More importantly, Apple’s patent FIGS. 17M, 17O and 17P shown below illustrate the option to use Touch ID if Face ID fails and a password if both biometrics fail.

The idea of having two biometric authentication methods on the same device could either have been dropped by Apple or is being considered in the future iPhones to match the dual biometric options offered by the likes of Huawei’s Porsche model smartphones.

The patent application was initially filed in Europe in late January 2018 and published publicly on Dec. 13, 2018.

Having Touch ID and Face ID on an iPhone would be pretty great. Face ID is awesome, but when it fails, punching in a passcode is pretty ‘painful’. #firstworldproblems