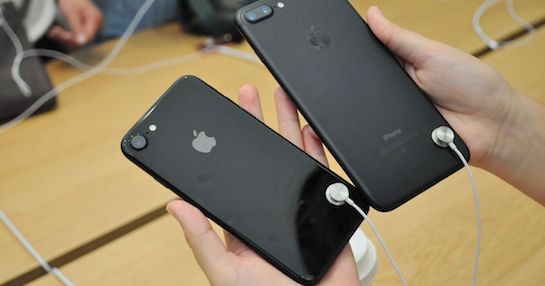 Apple has removed the anti-theft cables from iPhones on display at a number of its retail stores, including its Yorkdale location in Toronto, Canada and the revamped Regent Street store in London, England. According to MacRumors, a couple of other Apple Stores in the UK, where security tethers which activate audible alarms when disconnected, have been removed from all displayed iPhone models.

The courageous move effectively allows customers to walk into an Apple retail store, pick up an iPhone display model, and walk out with the device without paying, but Apple evidently feels the untethered experience is worth the risk.

Apple wants customers to be able to hold an iPhone properly, try out cases, and even pocket the device.

Apple notes that customers who attempt to steal iPhone display models, if not caught by security or CCTV cameras where installed, will walk away with unusable devices, as the company will simply place them into Lost Mode remotely using Find My iPhone.

Larger devices like MacBooks and iPads on display are however still using security tethers at Apple Stores.

Apple has just teased a handful of new titles which will be added to Apple Arcade’s ever-growing catalog of games during the month of December. In a tweet posted earlier today, Apple shared the following three new games are coming to its gaming subscription service this month: Dead Cells+ by MotionTwin JellyCar Worlds by Walaber...
Usman Qureshi
14 mins ago

Twitter has today highlighted its continued commitment to promote and protect the public conversation, noting that it is now better positioned to realize its ambitions than ever before. "As you’ve seen over the past several weeks, Twitter is embracing public testing,” the social networking company said in a blog post titled 'Twitter 2.0.’ “This open...
Usman Qureshi
29 mins ago