How Apple Influenced the Stormtroopers in ‘Star Wars: The Force Awakens’

Star Wars: The Force Awakens is set to hit theatres later this year in December, but fans are already excited for the next instalment of the famed series.

Costume designer for the movie, Michael Kaplan, revealed in an interview with Vanity Fair how he used a mantra involving Apple in designing the look of the stormtrooopers, asking himself “What would Apple do?”. A snippet of the interview is below:

Did you invent some kind of fashion back-story in your head to explain how the look of this galaxy might have evolved?

Maybe subconsciously, but with the stormtroopers it was more of a simplification, almost like, “What would Apple do?” J.J. wanted them to look like stormtroopers at a glance but also be different enough to kind of wow people and get them excited about the new design.

The stormtroopers designed by Kaplan are below–do you notice any Apple-like qualities? 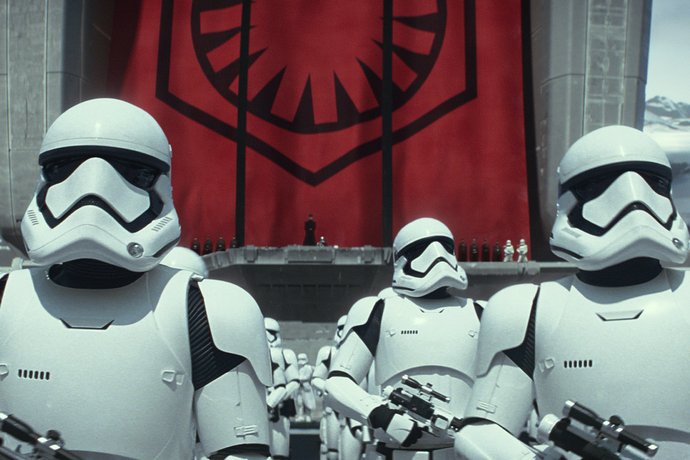 Stormtroopers in ‘Star Wars: The Force Awakens’ (image via Lucasfilm/Disney)

Apple may have influenced the film in more ways than one, as design chief Jony Ive earlier revealed to The New Yorker he gave director J.J. Abrams some specific advice on lightsabre design for the movie:

…And Ive once sat next to J. J. Abrams at a boozy dinner party in New York, and made what Abrams recalled as “very specific” suggestions about the design of lightsabres. Abrams told me that “Star Wars: The Force Awakens” would reflect those thoughts, but he wouldn’t say how. After the release of the film’s first trailer—which featured a fiery new lightsabre, with a cross guard, and a resemblance to a burning crucifix—I asked Ive about his contribution. “It was just a conversation,” he said, then explained that, although he’d said nothing about cross guards, he had made a case for unevenness: “I thought it would be interesting if it were less precise, and just a little bit more spitty.” A redesigned weapon could be “more analog and more primitive, and I think, in that way, somehow more ominous.”

Last month, J.J. Abrams wore an Apple Watch on stage at the movie’s fan panel in Anaheim, California, which helped drum up buzz ahead of the smartwatch’s debut later that month.