Apple and ‘The Rock’ Partner to Release Movie ‘The Rock x Siri: Dominate the Day’

Apple has teamed up with Dwanye ‘The Rock’ Johnson to release a movie on the iPhone maker’s YouTube, called The Rock x Siri: Dominate the Day, set to be released tomorrow. 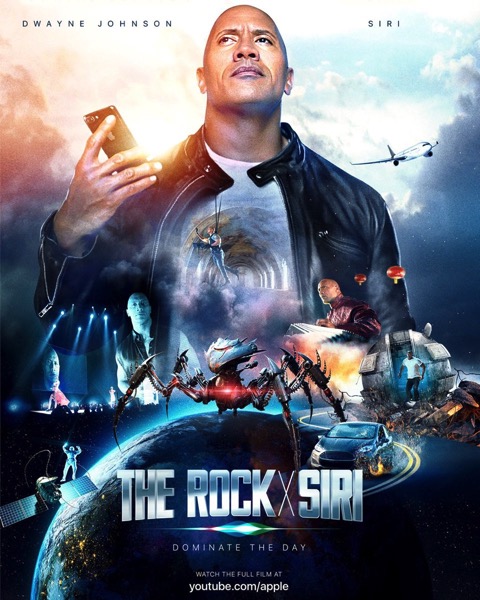 Based on the movie’s poster, it looks like it’ll be some sort of short movie. Replying to The Verge editor Chris Welch, The Rock said “Haha it’s a crazy fun commercial we’ll drop tomorrow. Dominate your day brother.”

Ha well I, of course was wildly inappropriate, but Siri – as always was the consummate professional. #ROCKxSIRI Commercial drops tomorrow! https://t.co/YMMMjZibOO

Here’s what The Rock had to say about his Siri movie on Facebook:

I partnered with #Apple to make the BIGGEST, COOLEST, CRAZIEST, DOPEST, MOST OVER THE TOP, FUNNEST (is that even a word?) movie ever.

And I have the greatest co-star of all time – #SIRI.

I make movies for the world to enjoy and we also made this one to motivate you to get out there and get the job done.
I want you to watch it, have fun with it and then go LIVE IT.

Stay tuned, as we’ll be sure to let you know when this short movie debuts tomorrow (yes, this is real life).

Update July 23 9:04 PDT: The video is now live on Apple’s YouTube channel–check it out here.

Sony and PlayStation are kicking off 2023 with a brand-new marketing initiative. Thanking fans for their patience worldwide as the company faced supply chain hurdles, PlayStation is launching its "Live from PS5" spot and announcing an increase in console supply. In a PlayStation Blog post, Isabelle Tomatis, VP of brand, hardware, and peripherals at Sony...
Steve Vegvari
26 mins ago