Apple to Developers: Get Ready for New Kids Category for Apps

Get ready for the new Kids category to debut in the App Store in iOS 7. Apple has sent out an email to developers to inform them about how to prepare their apps for kids, with three different age ranges available:

At WWDC, we announced a new Kids category for the App Store in iOS 7. The new category provides parents with a place on the App Store to find age-appropriate apps for their children. If your app is made specifically for children aged 11 or under, you can now choose an age range for your app on the iTunes Connect website. The following age ranges are available: 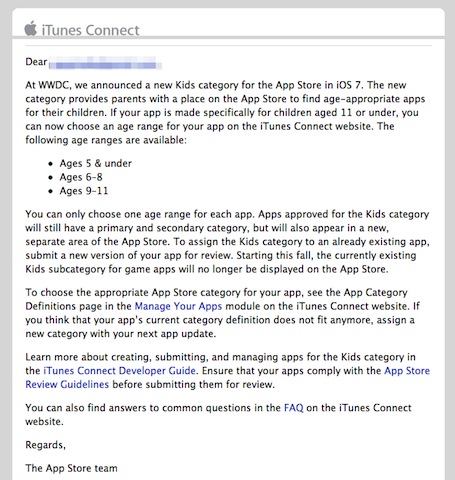 Apple says starting this fall, the currently existing Kids subcategory for game apps will no longer be displayed on the App Store so therefore developers need to adjust their apps to include an age range.