Rumours of Apple’s growth reaching an end have been around for quite some time now, but as the company’s recent iPhone sales numbers have shown, such reports are slightly out of touch with reality.

However, after the record-breaking first fiscal quarter sales – 51 million units sold between October 1 and December 31, 2013 – the company has set the benchmark high. But as it turns out, Apple is on track to post another record quarter if we can believe Morgan Stanley’s “Alphawise Smartphone Tracker” (via BusinessInsider).

Some analysts are predicting a lower-than-expected quarter for Apple, but Katy Huberty of Morgan Stanley estimates that the iPhone maker will announce about 42 million units shipped between January 1 and March 31, 2014. 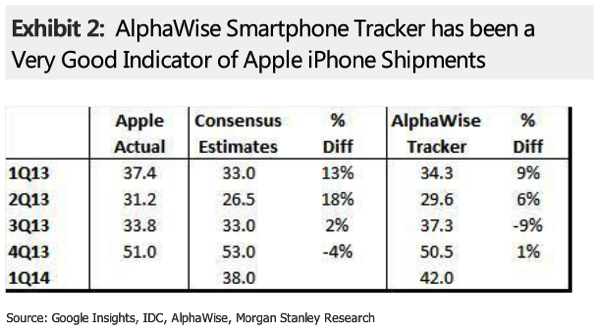 Her estimate runs counter to expectations based on information provided by the supply chain, which suggests about 38 million iPhones sold. This could mean that Apple would post about the same numbers it recorded a year ago.

But the Alphawise tracker uses a different kind of analysis, which has turned out to be pretty accurate during the past: for example, it predicted 50.5 million iPhones for the past quarter, and Apple reported 51 million units.

Huberty points to multiple factors when explaining her positive forecasts: the supply chain may work overtime during the holiday to generate extra production, which means they relax production in the March quarter, and also, US carriers have changed their policies this quarter, which could boost consumer demand.