According to the latest research published by Global Data, Apple the top acquirer of AI companies in the world. With Apple on top, four FAAMG companies feature in the list of top five acquirers of AI companies. Ireland-based Accenture was the only non-US company to appear in the top five. 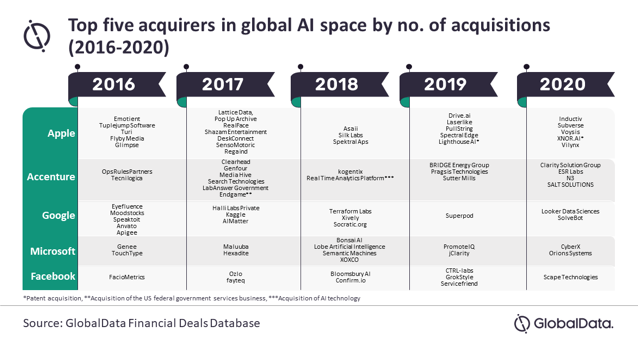 The US is the leader in AI, and the dominance of US tech giants in the list of top acquirers also indicates that these companies have some defined AI objectives, the researchers added.

“Apple has gone on a shopping spree in efforts to catch up with Google (Google Assistant) and Amazon (Alexa). Siri was first on the market, but it consistently ranks below the two in terms of “smartness”, which is partly why Apple is far behind in smart speaker sales. Apple also want to make sure to keep its strong position within wearables. It is the dominant player in smartwatches.”

Apple has been ramping up its acquisition of AI companies, with several deals aimed at improving Siri or creating new features on its iPhones.

[caption id="attachment_389637" align="aligncenter" width="1024"] Image: OpenAI[/caption] ChatGPT creator OpenAI today announced the launch of a new "classifier" designed to detect machine-written text. "We’ve trained a classifier to distinguish between text written by a human and text written by AIs from a variety of providers," the company said. While the company's AI-powered chatbot has taken the...
Nehal Malik
7 mins ago