Apple’s success with iOS devices began with the introduction of the original iPhone in 2007. From there, you can say it was all downhill. The evolution of both the iPhone, iPod touch, and debut of the iPad has resulted in one of the most valuable companies on Earth.

Barron’s annual list of the world’s most respected companies has just been published, and to no surprise, Apple topped the list for the second year in a row.Â Vito Racanelli, for Barron’s:

“the bouquet of accolades thrown at Apple might make even Steve Jobs blush … ‘visionary,’ ‘courageous,’ ‘innovative’ and possessed of a ‘strong corporate culture,’ which has fostered ‘consistent execution.'”

“For Apple,” he writes, “it is hard to know where respect ends and blind adulation begins.”

Below is the top 25. Google jumped up two spots to 6th, and Microsoft has remained at 22nd. 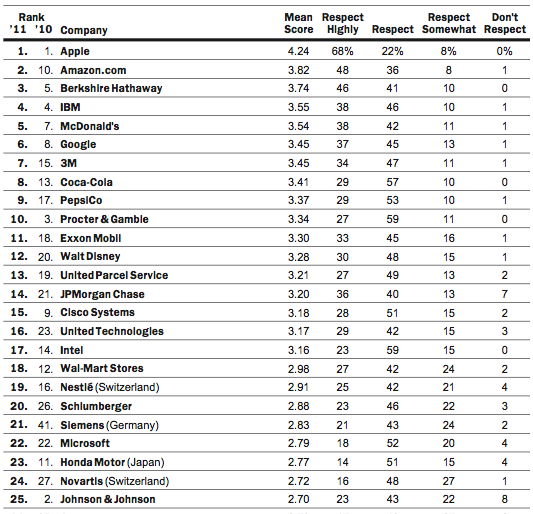 What do you think of the top 25? Do you think Apple belongs in the top spot?