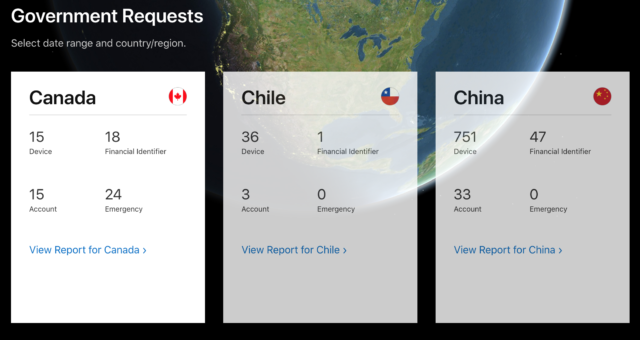 Apple yesterday released its biannual transparency report, which details how frequently governments and private parties request customer data. With more than 1.3 billion devices active around the world, governments are increasingly looking to Apple and its technology to gain information about users. Those requests have been rising over the years, and the first half of 2018 was no different.

The report gives a snapshot of government requests in an alphabetized list of countries through which you can horizontally scroll. Each country is represented with a card that displays the number of each type of data request — Device, Financial Identifier, Account, and Emergency — Apple received from its government. The cards also link to a more in-depth report that provides easy access to historical data from older reports.

“Apple is very seriously committed to protecting your data and we work hard to deliver the most secure hardware, software and services available,” reads the report. “We believe our customers have a right to understand how their personal data is managed and protected. This report provides information regarding requests Apple received from government agencies worldwide and U.S. private parties from January 1 through June 30, 2018.”

As for the figures, the transparency report reveals an increase in worldwide calls for information.

Worldwide, Apple received 32,342 law enforcement requests for access for customer data associated with a specific device in the first half of 2018, up from 29,718 in the second half of 2017. Apple provided user data for 80 percent of those requests, totalling 25,829.

The most requests for data access came from Germany, which accounted for 42 percent of the worldwide total. Apple notes that the high volume of requests in Germany was “predominantly due to stolen devices investigations.”