Check Out the First Reviews of Apple’s The Morning Show, See and For All Mankind

The Apple TV+ streaming service is set to launch this Friday with a handful of exclusive TV shows and movies, including three Apple originals: The Morning Show, See, and For All Mankind. The folks over at CNET, who have had a chance to check out all three shows, have just shared their initial reviews for each, as just one of a select group of media outlets with early access. 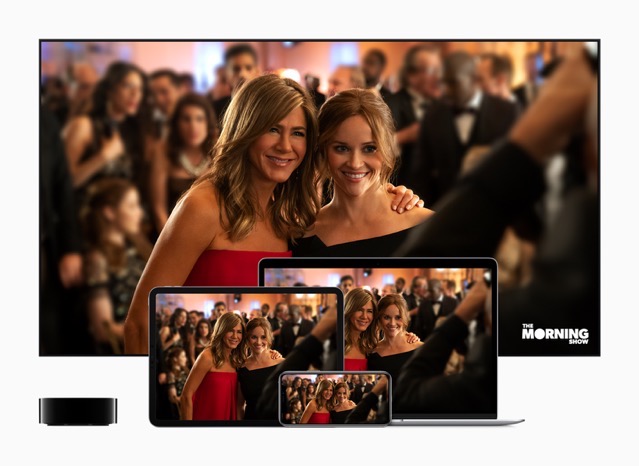 The 10-episode show starring Jennifer Aniston and Reese Witherspoon will make its debut on Nov. 1 with three episodes available at launch, followed by one new episode every Friday. Here’s what reviewer Patricia Puentes says about it:

“The Morning Show is a massively contemporary workplace drama about women in an often hostile industry. A story about how the moral compass established by the #MeToo movement has rocked everything, even the morning broadcast TV show you probably no longer watch.”

This fantasy show stars Jason Momoa and is about a world where everyone has lost their sight. It is written by Peaky Blinders creator Steven Knight.

“This entertaining fantasy show is a decent watch now Game of Thrones is nowhere to be seen, largely thanks to Momoa’s charismatic performance and Knight’s novel twist on the genre. See observes the Game of Thrones template by anchoring fantasy in committedly deadpan performances and eyefuls of wince-inducing violence.”

This drama presents an alternate history of the space race in which Russia reached the moon first.

“Our reviewer Erin Caron says the show does a good job of weaving together fact and fiction, but has a tendency to let certain plot lines wander, only to resurface them, giving you a moment of, ‘Oh yeah, that’s still happening.”

Apple TV Plus will cost $5.99 CAD per month in Canada with a seven-day free trial. Customers who purchase an iPhone, iPad, Apple TV, iPod touch or Mac can enjoy one year of Apple TV+ for free.