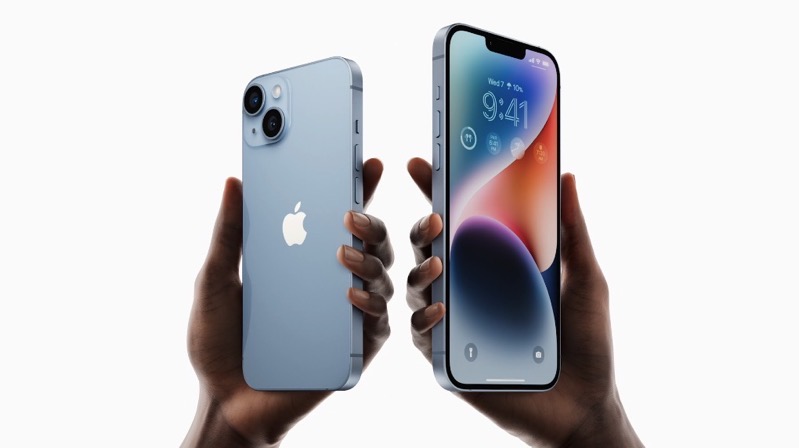 Apple has announced iPhone 14 and iPhone 14 Plus with 6.1-inch and 6.7-inch display sizes.

Apple says the best battery life is now available with iPhone 14 and iPhone 14 Plus.

These new phones get the A15 chip from iPhone 13.

Apple says iPhone 14 gets a new 12MP main camera with larger sensor and sensor-shift OIS. There’s a new True Depth Camera on the front with autofocus for the first time. The hybrid system offers better pictures in low light.

Photonic Engine is a new feature that improves low light photos, offering up to 2.5x improvement with details and colour versus iPhone 13. 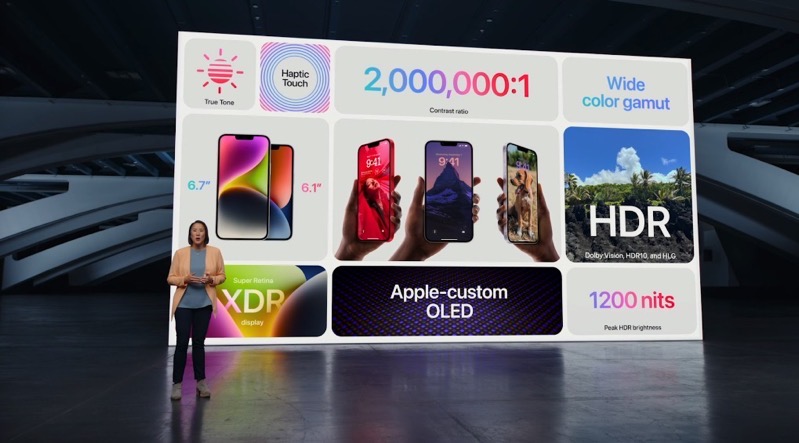 iPhone 14 and iPhone 14 Plus support 5G and supports eSIM, which Apple stressed as a highlight. All U.S. models now lack the SIM tray!

These new phones have a new HDR gyroscope and accelerometer to detect car crashes, like iPhone SE 2.

Apple says iPhone 14 and iPhone 14 Plus now support Emergency SOS via Satellite to bring connectivity where there are no cell towers. Communications satellites flying above Earth will be available when there’s a clear view of the sky, says Apple.

Apple invented custom components and software so iPhone 14 and iPhone 14 Plus can connect to frequencies when pointing at a satellite. Apple shows you where to point your phone at a satellite as it moves, reducing the need for a satellite.

Once connected you need to send communications so Apple created a short message algorithm to reduce file sizes, allowing for messages to be sent in 15 seconds or minutes if there’s foliage. Apple has preset messages for you to pick instead of typing a message.

This services launches in November for U.S. and Canada and is free for two years.

You can also share your location via Find My with satellite.

iPhone 14 pricing starts at $799 USD, the same pricing as iPhone 13. Available to order on September 9 with launch on September 16.

iPhone 14 Plus starts at $899 USD and is available to order on September 9, and launches on October 7.