On the opening day of the 2016 Major League Baseball (MLB) season, Apple has upgraded Siri to help baseball fans get even more out of their digital voice assistant. According to Apple, Siri can now answer questions about more detailed baseball statistics, including historical stats going back to the beginning of baseball records (via The Verge). 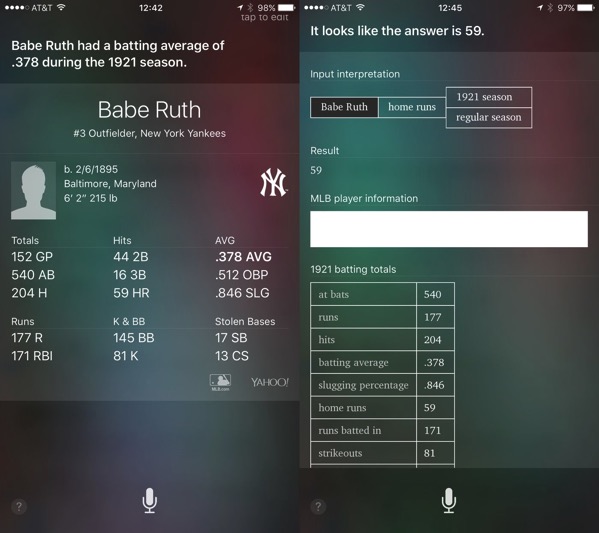 Siri can now provide information such as career statistics for MLB players, along with specific information for a total of 28 leagues other than the Majors, which also includes the Minors. While the new searches definitely make Siri more helpful than before for most gameday questions about a statistic, the voice assistant “still feels very limited”, notes the source.

“More peculiar, specific questions like, “When was the last time the Yankees had a perfect game?” yielded a generic search for the Yankees. Other searches just yielded a Google query. And results that did work had inconsistent presentation — some similar searches had were displayed in an Apple-designed frame, whereas others were a simple copy of a Wolfram Alpha result”.

Nonetheless, today’s upgrades are a welcome addition to Siri’s capabilities for every MLB fan.

Apple Music has just rolled out the ability for artists and bands to personalize their profile page with a custom bio, as well as the option to add their hometown, birth date or year formed, and more (via MacRumors). Following the latest updates, artists can now also quickly add lyrics for their songs on Apple...
Usman Qureshi
4 mins ago

According to a new report by CBC News, Halifax Transit's long-awaited fare-paying smartphone app is expected to go live in December, although people will still be able to use traditional paper bus tickets. The latest release timeline was shared earlier this week by Halifax Transit's manager of technical services Mark Santilli at the municipality's transportation...
Usman Qureshi
17 mins ago

Samsung Canada has just announced the LCD Glass Panel Replacement Program, a new repair service that serves as a more environmentally conscious option for replacing LCD screens on select Samsung devices. Through the new program, customers will receive high-quality repair service that will replace a damaged LCD glass on their smartphone instead of having to...
Usman Qureshi
29 mins ago