Steve Jobs Once Tried, and Failed, to Manufacture the Macintosh in California: NYT

Steve Jobs was once deadset on building Apple products in the United States. 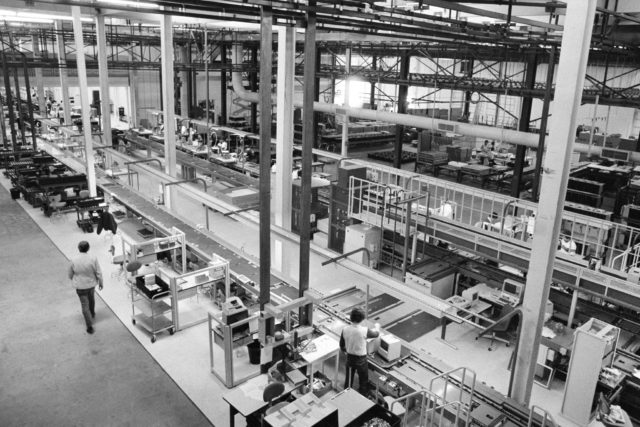 A new report from the New York Times explains how Steve Jobs oversaw the building of a manufacturing plant in Fremont designed to build Apple’s then-revolutionary new Macintosh computers. The article provides a look at how Jobs, fascinated by Henry Ford’s automobile assembly line process and the manufacturing abilities of companies like Sony, attempted to merge the two philosophies into a “highly automated” Macintosh factory:

“Steve had deep convictions about Japanese manufacturing processes,” recalled Randy Battat, who joined Apple as a young electrical engineer and oversaw the introduction of some of the company’s early portable computers. “The Japanese were heralded as wizards of manufacturing. The idea was to create a factory with just-in-time delivery of zero-defect parts. It wasn’t great for business.”

Apple began building the facility in 1983 with the intention of mixing Henry Ford’s mass assembly line practices with the production capabilities and product quality of Sony, reads the report. At the time of the plant’s construction, explains the Times, Jobs said it would be so technologically advanced that factory labor costs would account for just 2 percent of a Macintosh computer‘s price.

When Apple finally built the plant (Jobs was no longer at Apple at the time), it was never able to succeed in effectively incorporating the aforementioned assembly line practices so Macs could be built in a timely manner. Jean-Louis Gassée, Apple’s president of its product division in 1988 and a former office automation specialist, blamed the factory’s failure on deficiencies in the American infrastructure:

“I embarrassed myself attaching a display to the computer bezel with a screwdriver,” Mr. Gassée recalled in a recent interview. At the end of his shift, Mr. Gassée grabbed a broom and swept up the parts that had fallen off the production line. “It was really shameful,” he said of the noticeably slipshod process.

“We don’t have a manufacturing culture,” Mr. Gassée said of the nation’s high-technology heartland, “meaning the substrate, the schooling, the apprentices, the subcontractors.”

Additionally, due to lack of demand, the Fremont plant’s operation became less efficient and therefore less feasible over time. The Cupertino company finally closed the facility in 1992.

When Steve Jobs returned to Apple in 1997, he immediately hired Tim Cook as Apple’s senior vice president for worldwide operations, who helped in setting up the vast network of foreign suppliers and manufacturers that the Cupertino company uses to this day.

In other news, Apple plans to build a new $1 billion USD campus in Austin, Texas, adding thousands of jobs, while also setting up new large offices in Seattle, San Diego, and the Los Angeles area.