The folks over at iFixit published their traditional teardown of the 44mm Apple Watch Series 5 yesterday revealing a new S5 SoC and a slightly bigger battery but beyond that, they found the internals to be pretty much the same as the Apple Watch Series 4 from last year. 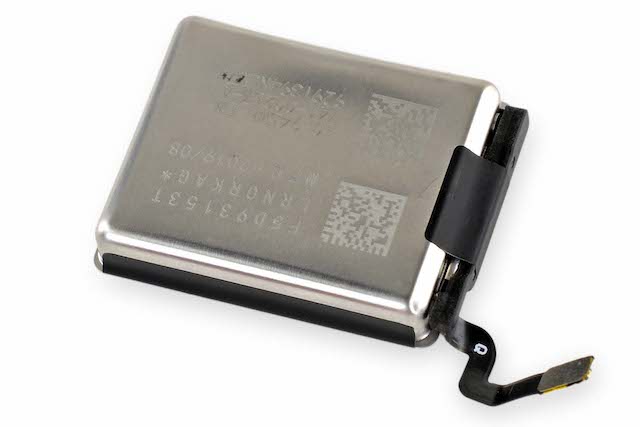 Today, they have shared their 40mm Apple Watch Series 5 teardown that seems to reveal a fairly significant change not found on the 44mm model i.e. a radically redesigned battery.

Instead of the usual dark-coloured outer foil pouch surrounding the battery, the teardown experts discovered a new metal casing that is most likely made out of aluminum.

“This is the first time we’ve seen this in an Apple product,” they say while adding that it might give us a hint about the future of battery replacements:

First, this new metal casing seems to be a more space-efficient method for sealing up batteries. In the Apple Watch Series 5, the overall size of the battery compartment doesn’t look like it changed much, if at all. But Apple managed to cram in 10% more battery capacity.

Additionally, the metal casing makes the battery physically stronger. This is fantastic for repair purposes since it’s all too easy to puncture a lithium-ion battery during repairs. The outer metal shell should allow device owners to pry out the battery without risking damage to the internals, reducing the associated fire hazard.

It, however, remains unknown why the new battery design is only found in the smaller 40mm Series 5 and not the 44mm version.