According to a report by AppleInsider, two new Apple patent filings published by the U.S. Patent and Trademark Office today show an earbud design that can detect user’s ears, control noise cancellation and music playback based on data from onboard sensors. With Apple making a recent $3 billion acquisition of Beats Electronics, it is likely that the company will apply the invention to future Beats headphones as well. 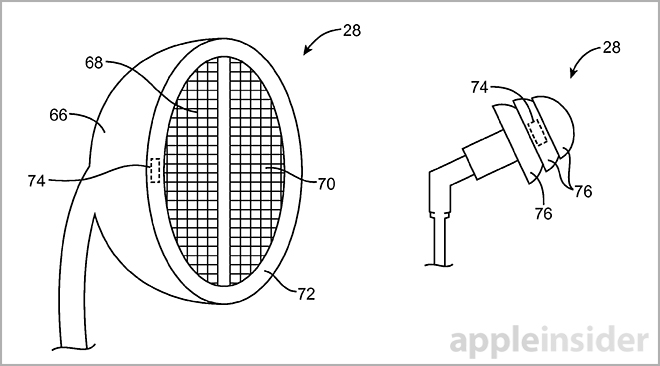 Apple’s patent applications titled “Ear Presence Detection in Noise Cancelling Earphones” and “Electronic Devices and Accessories with Media Streaming Control Features” detail how sensors can be used to detect a user’s presence and subsequently switch certain functions on or off. In the first invention specifically dealing with noise cancellation technology, Apple describes a basic earphone structure that can house both a speaker and noise cancelling microphone. In the second filing, Apple details a similar ear presence sensor setup, but applies it to media playback services such as music streaming.

“Unlike current Apple devices, however, the smart earphones in both patents use so-called “ear presence” sensors, which include accelerometers, capacitive touch sensors, force sensors, acoustic sensors and ultrasonic sensors, just to name a few. For example, the metal mesh screen normally used to protect a speaker’s delicate internal components can be made of conductive material to create a electrical resistance-based sensor.

The second application mentions a few other sensor types not covered in Apple’s noise canceling filing like temperature sensors, though the endgame is power savings through system automation.”

Apple’s smart earphone patent applications were both filed for on November 29 in 2012.

Today the first press reviews of Apple’s HomePod 2 hit the web, along with unboxing videos. The second-generation HomePod sports a similar design as its predecessor, has a 4-inch woofer and five tweeters (down 2 from before), plus gains a built-in temperature and humidity sensor, along with automatic room sensing for adjusting audio to your […]
Gary Ng
28 mins ago

Apple’s second-generation HomePod is set to launch on Friday, February 3, and ahead of the debut, the embargo has lifted on the first press reviews. HomePod 2 has the same price as its predecessor before the latter was axed, but this time supports Spatial Audio and room sensing for automatically-tuned sound, to go with a […]
Gary Ng
48 mins ago