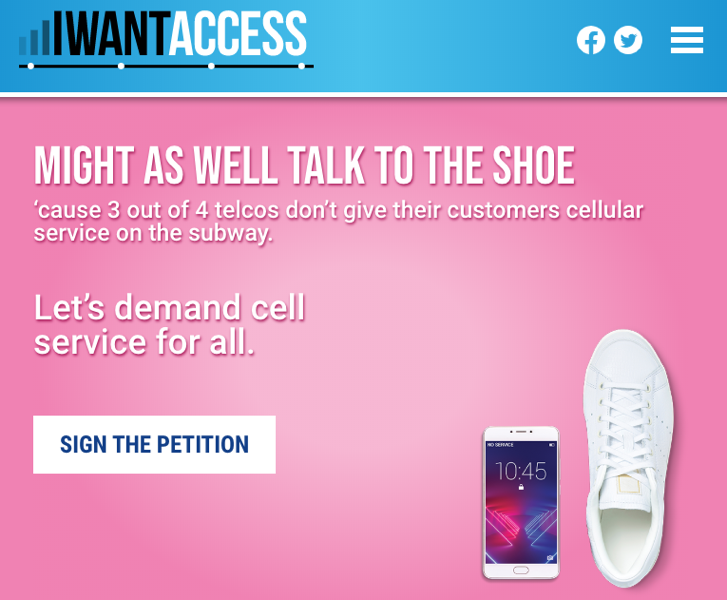 BAI Canada inked an exclusive 20-year deal worth $25 million with the Toronto Transit Commission (TTC) back in 2012, to blanket subway stations with Wi-Fi and cellular connectivity.

The problem? Only Shaw’s Freedom Mobile has signed onto the cellular network, while Rogers, Telus and Bell are still absent, leaving customers without cellular service during rides.

Now, BAI Canada has launched an ad campaign urging riders to sign a petition to speak up for cellular service from incumbents.

A new website iwantaccess.ca was created asking TTC riders to sign a petition. “Add your name if you believe everyone should have fair access to subway cellular service. Your voice is essential. This petition will be used to show growing support from the public and let the Big 3 Telcos know you want access,” reads the website.

RT if you’re frustrated that your phone works as well as a banana when you’re on the subway. It’s time to do something about it. Speak up. Demand access. Take action at https://t.co/Vj19j3VpzM pic.twitter.com/39I2FutHcQ

BAI Canada says data from recent TCONNECT surveys indicate people want cellular service from Rogers, Telus and Bell on the TTC. Select quotes from surveys are included, such as the following:

The company stresses, “Toronto is the only major Canadian city without a connected underground for all,” adding, “More than two-thirds of TTC riders surveyed are unaware that connectivity is available on the subway in Toronto, and 71% don’t realize that their mobile carrier isn’t allowing them to use it.”

In an interview with The Globe and Mail, Ken Ranger, chief executive of BAI, said, “We built a platform that can host any company with licensed spectrum,” adding, “It’s time to ensure that public knows that the option is there for coverage.”

BAI admitted there are no “meaningful talks” with the Big 3 at the moment.

Telus told the Globe there are “no concrete plans” to join the Toronto subway service. Rogers and Bell told the newspaper it favours the infrastructure model in Montreal’s subway—built by the Big 3 and Videotron. Chicago-based Extenet originally had a contract with Montreal’s STM, but major carriers held out from joining, causing the U.S. company to give up the network.

“Canadian wireless providers including Bell look forward to building out the wireless infrastructure required to serve customers on the Toronto subway system but have been denied access to do so,” said a Bell spokesperson in an email to the Globe, echoing a similar statement from last year.

Ranger added they’re taking a “long-term view” and the company has a plan and is “executing on it” and so far has been satisfied with its performance on the TTC.

Australia-based BAI hasn’t had any issues signing on with American wireless carriers in major U.S. cities. Its subsidiary—Transit Wireless—has signed all four major U.S. carriers to its network in the New York City subway.

Elon "Chief Twit" Musk on Thursday announced another move in his ongoing reform of Twitter, saying that the company will soon start telling users if they have been "shadowbanned" on the social network and providing them with an avenue to appeal the restriction. The news comes after journalist Bari Weiss published the second installment of...
Nehal Malik
2 mins ago