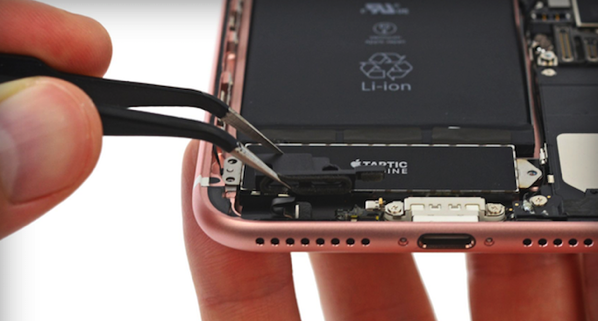 The folks over at iFixit started their iPhone 7 teardown yesterday, revealing how it uses a lot of adhesive, which is suspected to assist in waterproofing, in addition to a larger 2900 mAh battery. Another interesting tidbit discovered by the teardown experts is a piece of plastic that sits behind the ingress protection (waterproofing), right where the headphone jack would have been. According to Apple it’s a “barometric vent” (via The Verge).

“Apparently adding all the waterproofing to the iPhone 7 and 7 Plus meant that it was more of a sealed box, and so to be able to have an accurate and working barometer, Apple used that space. The barometer is the thing that allows a phone to measure altitude, and Apple points out that on the iPhone 7 it can measure even minor changes like climbing a flight of stairs”.

Apple has been arguing that the removal of the headphone jack isn’t just about the precise physical space that’s right there on the bottom-left of the phone, but is rather about the entire thing i.e the Taptic engine, the larger battery, waterproofing, the top speaker and more.

So while the mystery of that particular bit of plastic is now over, the whole “no headphone jack” debate apparently isn’t.