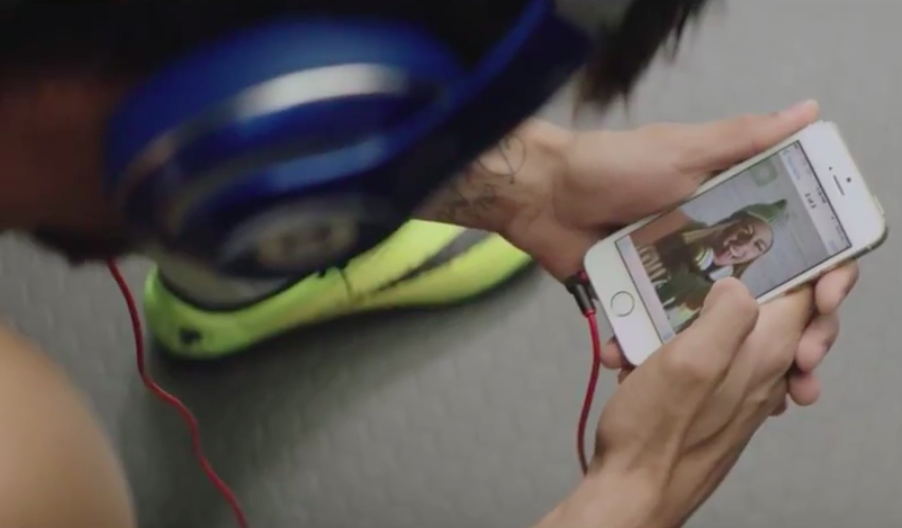 In celebration of the upcoming FIFA World Cup, Beats Electronics has rolled out a cinematic 5-minute ad, that shows just how powerful the Beats brand has become, and this is what Apple is spending its $3 billion on. The ad shows the iPhone 5s several times through its course, as it follows soccer player Neymar Jr. as he prepares to step under the world’s spotlight.

“Run like it’s the last day of your life,” he’s told. “Run like you’re a crazy man chasing happiness.” Several other players are also shown carrying out their pre-game rituals, and the ad perfectly bottles up the fanaticism that surrounds the World Cup — all without ever mentioning it by name.

Since this is primarily a Beats ad, you’ll see celebrity appearances from the likes of Lil Wayne, Nicki Minaj, Serena Williams, LeBron James and Stuart Scott, among others.

While Beats is not one of FIFA’s official sponsors, there are a few “un-Apple elements” in the advertisement. As The Verge puts it, you’ll notice “the dose of sex injected around the three-minute mark; that’s not a creative decision you’d ever see from Cupertino”.

Take a look at the ad and share your thoughts with us.

Call of Duty: Warzone Mobile may receive a regional launch. Apparently, the mobile-only spin-off of Activision Blizzard's hit battle royale is now available to install on Google Play in Australia. Earlier this month, Call of Duty: Warzone Mobile became available to preregister on the App Store as well as the Google Play Store. At the time,...
Steve Vegvari
39 mins ago